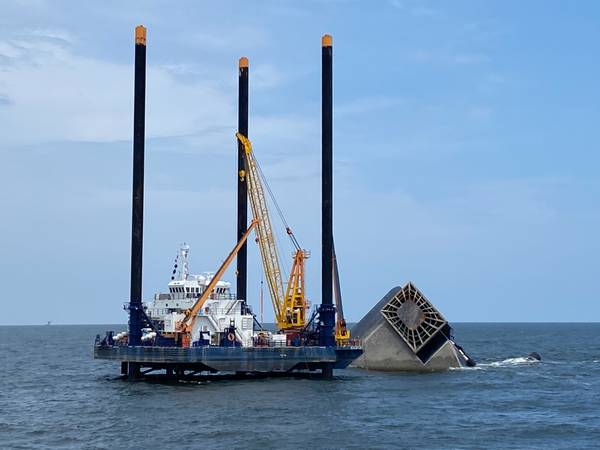 The Seacor Eagle is staged with gear near the Seacor Power off Port Fourchon, La. The vessel is being used as stable platform to assist in salvage and pollution response operations. (Photo: Brendan Freeman / U.S. Coast Guard)

Salvors have raised the bow section of the liftboat Seacor Power, which overturned in heavy seas in the Gulf of Mexico in April.

The Donjon-SMIT salvage team lifted the bow section to the surface of the water and transported it by barge on Saturday to the Modern American Recycling Services, Inc. (M.A.R.S.) facility in Houma, La.

Meanwhile, salvage work continues at the wreck site, where crews recently conducted more acoustic surveys of the stern and accommodation sections. The updated surveys will be used to complete the rigging configuration to prepare the stern section for removal. Once the stern section is raised, the crews will continue the preparation and removal of the accommodations section.

The unified commander is closely monitoring the weather and adjusting operations as needed to ensure the safety of salvage crews, the U.S Coast Guard (USCG) said.

There were 19 people on board when the U.S.-flagged Seacor Power capsized in extreme weather conditions about eight miles south of Port Fourchon, La. Six people were rescued by the Coast Guard and Good Samaritan vessels, six people died in the accident and seven remain missing.

The incident is under investigation by the National Transportation Safety Board (NTSB) and the USCG. 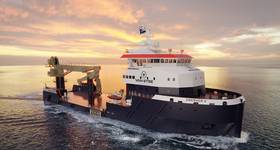