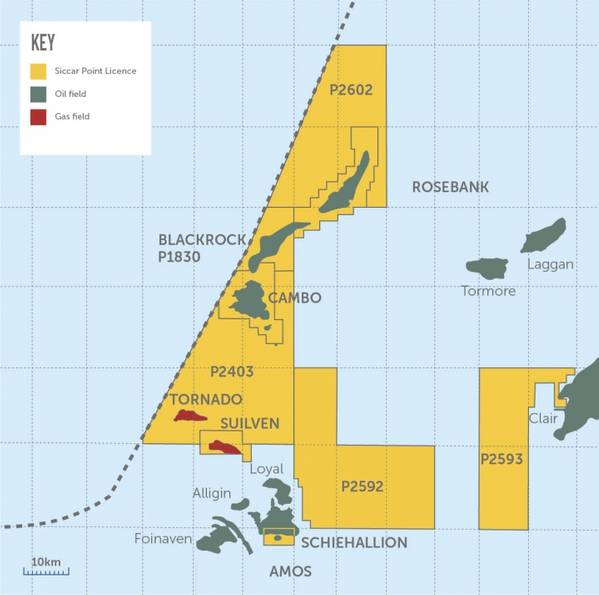 UK-focused oil and gas company Siccar Point Energy has made an application for consent to the Oil and Gas Authority for an environmental statement for the Cambo field development located near the UK/Faroe Island transboundary line.

The proposed development footprint is situated in water depths of between 1,050m in the southeast to 1,100m in the northwest within the Faroe-Shetland Channel. The nearest coast line is the Shetland Islands, located approximately 125 km to the east.

Additionally, the Cambo 204/10a-5Y well, drilled as an appraisal well in 2018, will also be completed for production.

Oil is planned to be exported via shuttle tanker and gas will be exported via a gas export pipeline (situated at water depths of 1,085m to 190m) extending 70 km to the southeast of the Cambo field, terminating at the West of Shetland Pipeline (WOSPS).

The project is subject to an environmental impact assessment procedure and regulation 13 applies as the project could have a significant effect on the environment of the Faroe Islands, Siccar Point said.

The OGA is responsible for deciding whether or not to grant consent for the project, but an agreement to the grant of consent must be obtained from the Secretary of State for Business, Energy, and Industrial Strategy prior to consent being granted.

Siccar Point, with its partner Shell, in March last year delayed the planned sanction for the Cambo offshore project to the second half of 2021, citing "the unprecedented worldwide macroeconomic dislocation resulting from Covid-19."

The Cambo field, located 125km northwest of the Shetland Islands and in a water depth of 1100m, was discovered in 2002, and subsequently had 4 appraisal wells drilled up to 2012 and a final successful appraisal well was drilled and flow tested by Siccar Point during the summer of 2018.

According to Siccar, which acquired the Cambo licenses from OMV in 2017, Cambo is one of the largest undeveloped fields in the UKCS and will open up other prospects for potential development in the area.

In its recent FPSO report, released in May, WER said: "We see the project FID in 2022-- with production start in 2025/26 -- assuming Siccar Point brings in an additional farm-in partner, which it is planning to do. As of Q2 2021, Siccar Point is planning to hive off 40% share in the license."