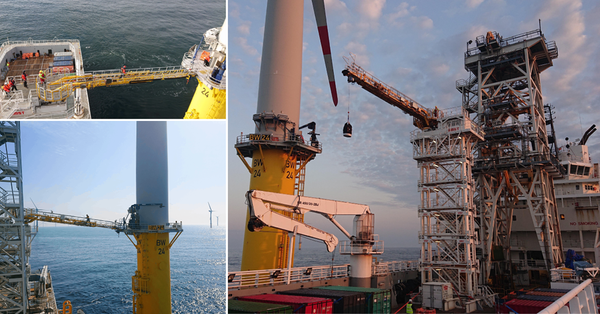 Dutch offshore equipment firm SMST recently signed a deal with DOF Subsea to deploy a motion-compensated gangway from the SMST rental fleet aboard one of DOF Subsea's offshore vessels.

SMST said this week that the gangway was installed a few weeks ago on DOF Subsea's Skandi Constructor vessel, enabling safe and efficient walk-to-work of their crew and transfer of cargo in the Global Tech 1 offshore wind farm in Germany. This was SMST's first W2W deal with DOF Subsea.

The gangway commissioning team of SMST had early in April traveled to FAYARD shipyard near Odense (Denmark), for the mobilization of the gangway, the SMST Telescopic Access Bridge M-Series (TAB-M).

The gangway was installed on 6 stacking modules for working on height up to over 24 meters. The vessel’s crew was then trained by SMST for operating the gangway in the Global Tech 1 offshore wind farm, for a term of up to 120 days.

"Flexibility is key for our project and SMST fits in perfectly with it. Their equipment easily adheres to the requirements of the two different projects for Siemens Gamesa”, said Øyvind Våge, Chartering Manager at DOF Management AS.

"The collaboration between our two companies is also excellent. Together we achieved a very swift mobilization of the gangway. A great effort by all parties involved."

After the first project in the North Sea for Siemens Gamesa, the Skandi Constructor will continue its work in the Baltic Sea, in the Wikinger offshore wind farm. The SMST commissioning team will remobilize in Bremerhaven for this second project.