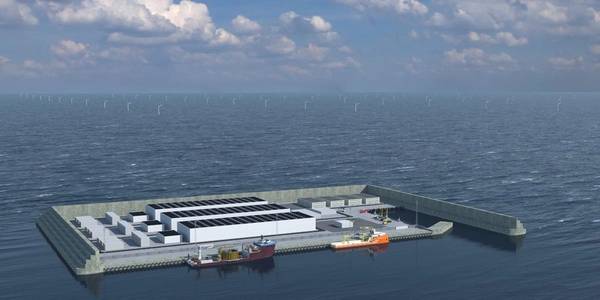 Dutch offshore survey firm Fugro and Sweden's MMT have won contracts with the Danish grid operator Energinet, to carry out seabed surveys for the Danish Energy Island project in the North Sea.

The contracts follow an announcement by the Danish authorities in February that the country would build the first of its kind wind energy hub in the North Sea that promises to produce yet unseen amounts of green electricity, in what has been described as the largest construction project in Danish history.

The energy island in the North Sea will be an artificial island consisting of one or more types of caissons 80 km off the Danish coast, and initially covering an area corresponding to 18 football fields.

"[Fugro's and MMT's ] ships are loaded with seismic equipment to meticulously map the seabed under the more than 1,000 km2 area in the North Sea where the artificial energy island and 3 GW of wind farms are to be built," Energinet said.

According to Energinet, in the area to be surveyed, the sea is 25-50 meters deep.

"The relatively shallow sea depth and good wind conditions are what make the North Sea an ideal location for offshore wind farms, and now also an artificial energy island. A third important factor is that the seabed must be suitable for laying foundations for the around 200 offshore wind turbines initially planned, and the artificial island," Energinet said.

Explaining the importance of the seabed mapping project, Energinet added:"Each wind turbine will be an impressive edifice, with an expected height above sea level of up to 260 metres – taller than the pylons of the Great Belt Bridge. An artificial island will also be constructed. So, it easy to see why the surface of the seabed and the underlying layers (in which the foundations will be laid) need to be thoroughly surveyed and mapped.

Fugro and MMT will survey and map the surface of the seabed and the geological layers underneath to a depth of 100 meters below the seafloor.

While, sandbanks, reefs created by marine life and boulders are examples of geological elements that the ships from Fugro and MMT will map, Energinet said that the ships are also expected to encounter shipwrecks in the region from the largest naval battle in history – the Battle of Jutland in 1916 and have to identify unexploded ordnance (mostly bombs and mines from World War II).

Under the contract with Energinet, Fugro will perform geophysical and unexploded ordnance (UXO) magnetometry surveys, which will be used to prepare an integrated geological and geotechnical soil model on which wind farm developers will base future tenders.

Fugro will work in the area from May to November 2021, resuming in February and March 2022. Fugro's scope will comprise two phases: Phase 1 will deliver the geophysical surveys, including seabed sampling and soil data down to at least 100 m below the seabed; Phase 2 will be the UXO magnetometry survey, using Fugro’s Geowing solution.

"The geophysical studies have to cover a very large area, and it’s important that they meet the time schedule. We are therefore pleased that an experienced and professional company such as Fugro will be performing the surveys in the North Sea,” said Poul-Jacob Vilhelmsen, Project Manager for Energinet’s work on the future energy islands in Danish waters.