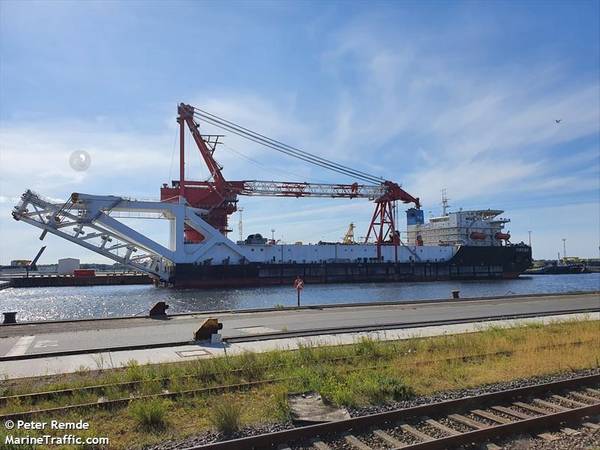 The U.S. representatives listed 15 ships in the letter that are "possibly engaged" in laying pipelines or related activities since Jan. 1 when the latest U.S. sanctions became law, including the Russia flagged vessels, the Ivan Sidorenko, the Murman, and Fortuna - Image: Fortuna vessel/Credit: Peter Remde/MarineTraffic.com

Several U.S. Representatives on Wednesday raised pressure on the State Department to share plans on potential sanctions on the Nord Stream 2 natural gas pipeline Russia is racing to finish to take fuel to Europe.

"If completed, Nord Stream 2 would enable the Putin regime to further weaponize Russia's energy resources to exert political pressure throughout Europe," two Republicans including Michael McCaul, and two Democrats including Marcy Kaptur, wrote in a letter to Secretary of State Antony Blinken.

Several companies, including Zurich Insurance Group, have already left fearing sanctions, and companies listed in the report could drop out of the project, making completion difficult.

Nord Stream 2 is more than 90% complete but requires additional tricky work in deep waters of the Baltic Sea off Denmark. The pipeline would bypass Ukraine, through which Russia has sent gas to Europe for decades, depriving it of lucrative transit fees and potentially undermining its struggle against Russian aggression.

The representatives asked Blinken for a briefing with State Department officials to inform them of the status of the report and their assessment of possible sanctionable activity of vessels believed to be helping to finish the project.

President Joe Biden believes the $11 billion pipeline, which would double the existing capacity of the Nord Stream system to take gas undersea to Germany, is a "bad deal for Europe," according to his press secretary Jen Psaki.

A State Department spokesperson said on Wednesday: "As a general matter we don’t comment on communications with Congress.” Spokesman Ned Price told reporters last week that "sanctions are only one" of many tools and that the department will work closely with allies and partners to reinforce European energy security and to safeguard against "predatory behavior".

The U.S. representatives listed 15 ships in the letter that are "possibly engaged" in laying pipelines or related activities since Jan. 1 when the latest U.S. sanctions became law, including the Russia flagged vessels, the Ivan Sidorenko, the Murman, and Fortuna. The Trump administration slapped measures, under an earlier sanctions law, on the Fortuna on its last full day in charge.

The lawmakers said the briefing should include details on "any proposals offered to the Biden administration on the future of the pipeline that aim to persuade the administration to forego or weaken the mandatory sanctions," apparently referring to any talks between Washington and Germany for a deal on the project.

Gazprom insists the project will be completed in 2021.