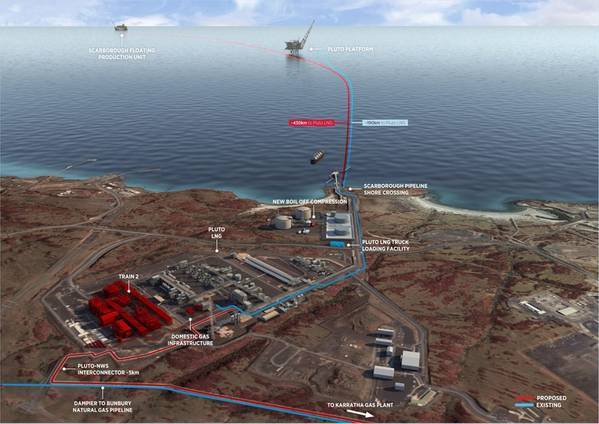 Woodside Energy expects strong buyer interest in the sale of a share of a new production unit at its Pluto LNG plant, top executives said on Thursday, a precondition for a planned $11 billion expansion at its Scarborough gas and Pluto project.

The result was well short of analysts' forecasts, which sent its shares down as much as 3.7% after the result was released on Thursday.

Woodside is looking to sell a 50% stake in the new production unit, or train, at the Pluto liquefied natural gas (LNG) plant in Western Australia, which will be fed with gas from the Scarborough project.

Selling a stake would be key to avoiding a capital raising or a credit downgrade.

The company suspended the sale process last year when oil prices slumped but is now optimistic about luring buyers.

"The buyer appetite for infrastructure assets just continues to grow. And so we do believe that there'll be strong interest in that asset," she said.

Woodside's other growth project underway is the Sangomar oil development off Senegal, where its partner FAR Ltd has just received a tentative takeover offer from Russia's Lukoil.

Woodside last year pre-empted Lukoil from buying Cairn Energy's stake in Sangomar, as it was concerned the project could then fall foul of U.S. sanctions on Russia.

However, Chief Executive Peter Coleman said on Thursday there was no concern with Lukoil becoming a partner through a takeover of FAR, as FAR's stake in the Senegal project was below the 33% equity threshold for U.S. sanctions.

Woodside stuck to its forecast for fiscal 2021 output of 90-95 million barrels of oil equivalent, lower than its production in 2020.

On a statutory basis, Woodside posted an annual loss of $4.03 billion, its first loss in eighteen years, hit by $4.37 billion in asset write-downs it took at the half-year.

(Reporting by Sonali Paul in Melbourne; Additional reporting by Sameer Manekar and Shruti Sonal in Bengaluru; Editing by Bernard Orr and Richard Pullin)