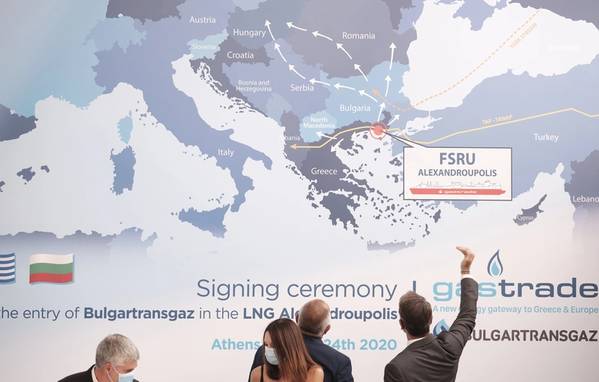 Credit; Gastrade - Photo from the signing ceremony in August 2020

Bulgartransgaz, the operator of the national natural gas transmission network of Bulgaria, has officially taken a 20% share in Greek company Gastrade that is developing an LNG floating storage and regasification unit (FSRU) offshore Alexandroupolis.

The agreement for Bulgartransgaz to take a 20 percent stake in Gastrade was signed back in August 2020. Following the approval granted by the Bulgarian Commission for Protection of Competition, the transaction became effective on Thursday, January 28.

The FSRU will be moored in the offshore area 17.6 km southwest of the port of Alexandroupolis. The floating unit will be connected to the National Natural Gas Transmission System through a pipeline system of a total length of 28 km.

The project is expected to start operations in 2023.

"The Alexandroupolis LNG Terminal is one of the most significant energy projects realized in recent years, with high importance for Greece, Bulgaria, and the wider region, since it materially contributes to the diversification of energy sources and routes for the entire Southeast Europe, enhances energy security and competition in the region, and supports the creation of a regional Natural Gas Hub.

"The project is strategically located at the crossroads of the Southern and Vertical Gas Corridor and offers access to Liquified Natural Gas to the markets of Greece, Bulgaria, Serbia, Romania, Northern Macedonia and further to Moldova and Ukraine," Gastrade said.

"The participation of Bulgartransgaz, that is of the Bulgarian State, in Gastrade is a solid proof of the regional profile of the project and it constitutes a catalyst for the integration of Southeast European gas markets, securing energy liquidity and pluralism throughout the region," Gastrade said.