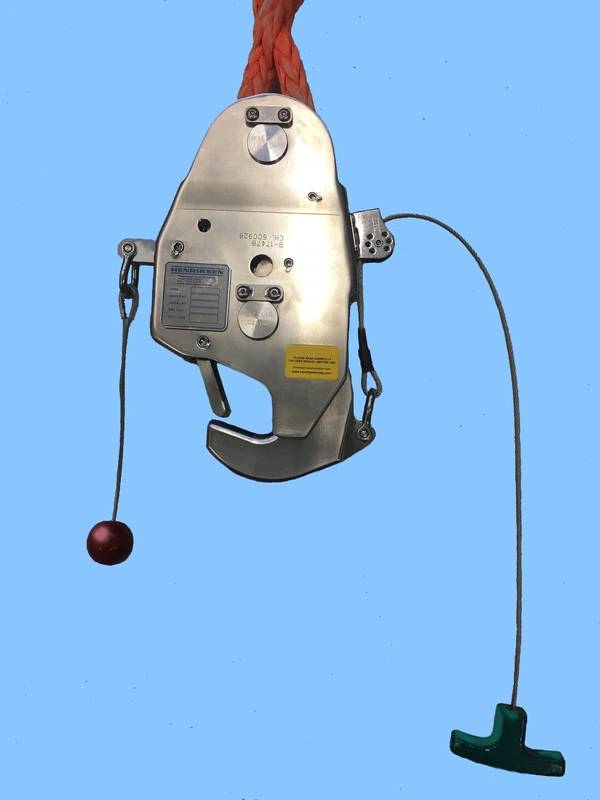 Now available globally, the new crane hook has been especially developed for launching inflated liferafts. It is permanently attached to the fall wire of a crane and clips into a steel lifting ring on the liferaft. It holds the liferaft safely while it is being hoisted out and lowered and releases automatically when the raft reaches the water and the load has come off the hook.

"First shown in 2017, the hook has attracted considerable interest from the marine and offshore markets but Henriksen has held it back until it completed a long and complex testing program," the company said.

“The specific nature of this hook required us to be satisfied that it will function perfectly under load in any climatic conditions,” explained sales manager Ole Rasmus Undrum. “Our company has a 100% safety record and we had no intention of risking our reputation that we have worked so hard to maintain. We could only achieve this by investing in new machinery and developing testing techniques that we could use in-house. This equipment included two different machines to test cyclic load: one to test the hook for loads between about 100 kg and up to the safe working load. The other was for testing the full on and off-load cycle with a range of test loads up to 3,850 kg. This particular trial was very labor intensive and required around four weeks of nonstop testing. There was, in addition, a pendulum machine designed to test the hook for an abrupt stop and for collision against the ship’s side. Happily the hook has now passed its scrutiny with flying colors, and we are confident that it will prove to be an asset for our company and for our customers.”

Versions of the hook are available for holding loads of 1,500 kg and 3,500 kg and feature a number of safety options that make them reliable and easy to operate in an emergency, the manufacturer said.. To activate the automatic release facility, a liferaft occupant pulls a red knob downward when it is just one or two meters above the water. This raises a black ball on the top of the hook to indicate that the release mechanism is active. Once afloat and the load on the hook is less than 30 kg, it opens automatically enabling the raft to drift free and for the fall wire to be hoisted in.

If conditions are such that it is not possible to use the automatic release capability, the Henriksen hook also offers a manual opening facility that can be used as long as the load on it is no greater than 150 kg. This might occur if the raft is on the water but is being pulled by a strong current or by vessel movement. Under these circumstances, a green toggle on the hook can be pulled strongly and the hook will open.

When the crane operating crew has recovered the hook, it can be quickly readied for use again by pulling the black knob down to its original position. With the hook element reset it can be clipped into the steel lifting ring on the next liferaft for launching.