The history of protecting marine assets is a tale of endless perseverance. From the moment humans have put infrastructure in the water, it has been damaged by other humans. Despite incredible advances in technology and installations, incidents still occur at an unacceptable rate.

The types and volume of marine assets have exploded since the 1850s when the first submarine telegraph cables were laid. Today oceans, seas and lakes are the home of thousands of cables, tens of thousands of miles of subsea pipes, and countless underwater storage tanks. Above surface, assets are also still at a surprising level of risk. Offshore wind farms, oil and gas platforms, and even fish farms still suffer from vessel collisions.

The first lesson on protection was learned on the first subsea cable in the first week
The first commercial underwater communication cable was laid on August 28, 1850 across the English Channel by the Submarine Telegraph Cable Company. On only the second night, a French fishing boat accidentally pulled up the cable and cut a piece out of it, apparently believing it was a strange species of seaweed! It was a taste of things to come. Fishing vessels have since been the bane of subsea cables, with the International Cable Protection Committee (ICPC) advising that more than two-thirds of all submarine cable faults are caused by fishing and anchors.

First steps to protect cables against fishing vessels
As subsea cable infrastructure rapidly grew from the 1860s, the threat that fishing vessels presented was internationally recognized. It was taken so seriously that in 1884 The Convention for the Protection of Submarine Telegraph Cables was signed by 27 countries. Among other provisions, the treaty created a mechanism by which fishing vessels could claim the cost of cutting fishing nets that were caught on a cable.

Pipelines followed 100 years later
Despite the first onshore pipelines appearing in the 1850s, it wasn’t until 1954 when they were first commercially constructed offshore. This was a 10 miles long gas pipeline in the Gulf of Mexico that was laid at a depth of between 20 and 32 feet.

Although obviously more robust than cables, and with the benefit of 100 years of technology improvements, pipelines have not been impervious to the threat of sea vessels. Armored enclosures and burying pipes in high traffic areas haven’t eliminated pipeline damage by vessels. When they are damaged, the impact can be severe, with loss of lives, assets, and serious harm to the environment.

Getting physical
For the first 150 years, the primary defense against damage by vessels was through enhanced physical protection. Cables and pipes were buried in high marine traffic areas, particularly where there was a risk of dredging or anchoring. Where possible, physical buoys were deployed. Marine charts were clearly marked to show the location and area of some subsea cables and pipes.

But even burying cables and pipes and marking them on charts wasn’t a guarantee of protection, as New York Power Authority discovered twice within a 10-year period. Despite its cables across Long Island Sound being buried 10 ft. under the seabed, anchor strikes ruptured cables resulting in millions of dollars in repairs each time.

The risk to subsea infrastructure grew exponentially
Despite all attempts, two factors resulted in ever-increasing risk and damage to marine assets. The first was the incredible growth in subsea infrastructure. By way of example, subsea pipelines in the Gulf of Mexico went from zero in 1953 to over 28,000 miles today.

Secondly, the number and size of vessels dramatically increased. The OECD reports that from 1900 to 2000, the number of maritime shipping vessels grew from under 30,000 to nearly 90,000 ships. The size of these vessels increased even more dramatically, with total gross tons increasing more than 11 times, from less than 50 million to over 550 million Tons. Analysis of fishing vessel data found that the world’s fishing fleet doubled in size from 1950 to 2015, reaching 3.7 million vessels.

Surely things are getting better
More vessels with bigger anchors, heavier dredges, and larger nets has resulted in more damage to marine infrastructure than ever before. A few recent examples…

April 2018 was a dark month with three major incidents. These included the loss of five lives in Indonesia when a vessel dropped anchor in a restricted area and dragged a Pertamina pipeline causing it to burst. In Port O’Connor, Texas, a dredge caught on fire after hitting a subsea gas pipeline, and in the Straits of Mackinac, on The Great Lakes, a dragging anchor dented a major pipeline and damaged electric cables causing a mineral oil leak.

On December 23, 2019, Malta lost power for 3 hours after a vessel’s anchor cut a power line to the country. The cost of repair and mitigation is estimated to be over 20 million euros.

As recently as January 9, 2020, 14 countries in West Africa experienced massive telecom disruption when the FALCON cable was cut in two places by a suspected anchor drag.

Why hasn’t technology saved us?
In addition to the enhanced physical protection of marine assets, there have been considerable improvements in technology over the last 170 years. Electronic Chart Display and Information Systems (ECDIS) clearly display a large proportion of subsea pipes and cables. All large vessels now operate with AIS, making their size, speed, and identity clear to anyone actively monitoring a potential threat. Interception vessels (boats and aircraft) are sometimes used to protect marine assets from potential threats. In all these solutions, the essential problem remains – human error. In its 2019 annual report, the European Maritime Safety Authority points out that 65.8% of all European shipping accidents investigated between 2011 – 2018 were due to human error.

Is there hope on the horizon?
In its review of the Pertamina incident, Indonesia’s Environment and Forestry Ministry made its view on how the incident could have been prevented very clear, stating Pertamina “lacked an early-warning system and had no automated monitoring.”

Enbridge identified it could reduce the risk of an anchor strike on its Line 5 pipeline in the Straits of Mackinac by 88.4% through automated proactive messages to vessels that present a risk. Combining this with enhanced physical protection reduces the risk of damage by 99.9%.

With the universal adoption of AIS by large vessels, automated solutions have recently become a viable and meaningful method of protecting marine assets. The ability to digitally mark infrastructure for vessels to more clearly see on their ECDIS (navigation station), especially those not marked on charts, along with automated alert messages directly to their ECDIS is the most significant and positive development in preventing damage since that first telegraph cable was cut in 1850. Proactive, automated solutions can often be cost-effective to deploy and manage, and with their significant reduction in the likelihood of fatal and costly damages, are become an essential comprehensive layer of protection. 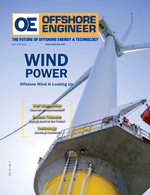 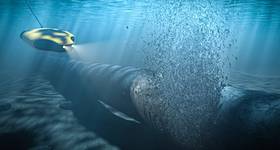