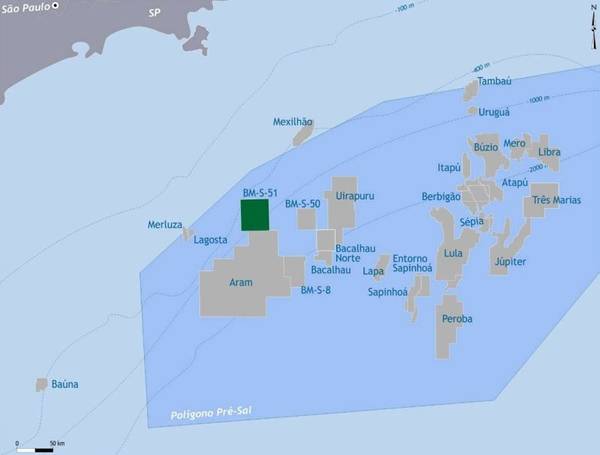 Brazilian oil company Petrobras is looking to sell at least half of its stake in a 698 square-kilometer pre-salt block in the Santos Basin offshore Brazil.

Petrobras launched a teaser on Monday for the sale of 50% to 100% of its stake in the concession name BM-S-51 .

The offshore block sits at water depths ranging from 350 meters to 1,650 meters and about 215 km off the coast of São Paulo, and, according to Petrobras, it has the potential to prove significant volumes of oil in the pre-salt area.

"This transaction is in line with the portfolio optimization strategy and the improvement of the company’s capital allocation, increasingly concentrating its resources in deep and ultra-deep waters, where Petrobras has demonstrated great competitive edge over the years," Petrobras said.

The BM-S-51 concession was acquired in ANP’s 7th Bidding Round in 2005 and is in the 1st Exploratory Period, with a remaining commitment of drilling one well in order to comply with the Minimum Exploratory Program.

According to Petrobras, the block is strategically positioned in relation to the Santos Basin discoveries and exploratory areas within the production sharing polygon.

Petrobras is the operator with an 80% stake in this asset, in a consortium with Repsol Sinopec Brasil, which holds the remaining 20%.