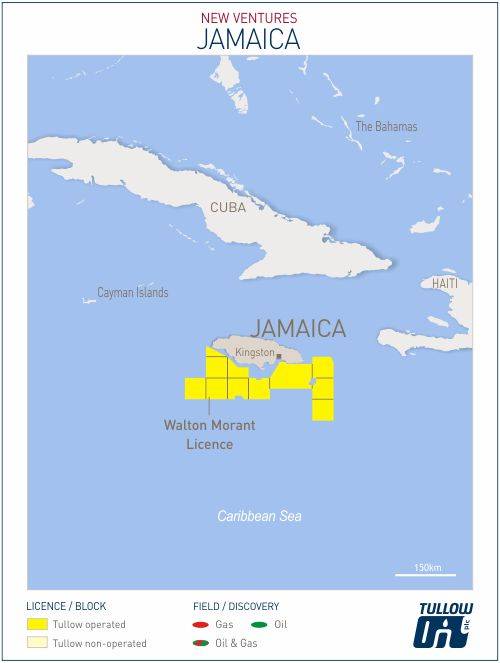 UOG said Monday the Jamaican Government had assigned it Tullow Jamaica Ltd's 80% equity in the Walton Morant license for a nominal fee, leaving the company as operator and 100% equity holder.

Tullow in 2018 conducted a 2,200 sq km 3D survey over the offshore block, however, it then elected not to proceed into the next stage of the license.

With UOG now taking over, the initial exploration period over the block has been extended by 18 months, meaning UOG now has until January 31, 2022, before the drill-or-drop decision is required.

"A portion of the license has been voluntarily relinquished, leaving a more focussed area of c. 22,400km2 that still incorporates all of the identified prospectivity," UOG said.

United plans to complete a work program to further de-risk what it describes at "the high-graded Colibri prospect." Th company plans to "perform detailed interpretation of the numerous follow-on targets, including Moonraker,Thunderball, Moneypenny, Jaws, Goldfinger, Vesper, Oriole, Earspot and Rumpspot."

"This cost-effective activity will be informed by the feedback from companies who have engaged with United and the previous licence operator in the data room process to date.  It is believed this work will have a significant impact on the continuing farm-down process," UOG said.

"The amended Walton Morant Licence covers an area of 22,400km2, and has numerous plays and prospects already identified across three separate basins. 11 wells have been drilled to date (9 onshore, 2 offshore), and all bar one contained hydrocarbon shows," UOG said.

United invested in an updated independent Competent Person's Report for the license in 2019.

According to the company, this identified a total gross un-risked mean prospective resource of 229 MMstb on the Colibri Prospect alone.

"In high-case scenarios, the gross unrisked resource estimates for Colibri suggest up to 513 MMstb could be recovered. The Walton Morant licence covers an extensive area (c. 22,400km2) and numerous follow-up structures have been identified that would be significantly de-risked on success at Colibri," UOG said.

"It is estimated that United will have acquired the results of approximately $30m of investment by the previous operator [Tullow] in the license," UOG said.

Brian Larkin CEO, United Oil and Gas PLC: "Walton Morant has the potential to have a major impact on United Oil & Gas and we are delighted to have successfully concluded an agreement with the Jamaican Government to take on operatorship and to develop this license for the benefit of all stakeholders."

"The United team know this licence well, having worked on it for many years.  Our experience and understanding of the licence and conviction about it was critical to the Jamaican Government's decision to grant us operatorship, 100% interest, and an 18-month extension.  We are confident in the quality of this licence and in the opportunities that exist not only in the Colibri prospect, but across the full 22,400km2 area.

"We will move ahead with a cost-effective programme of activity, building on the significant work that Tullow and United had completed over the last two years and the feedback from a very active farm-down process.  Our goal will be to further de-risk the asset, bring in partners and move ahead to plan a well on the Colibri prospect."