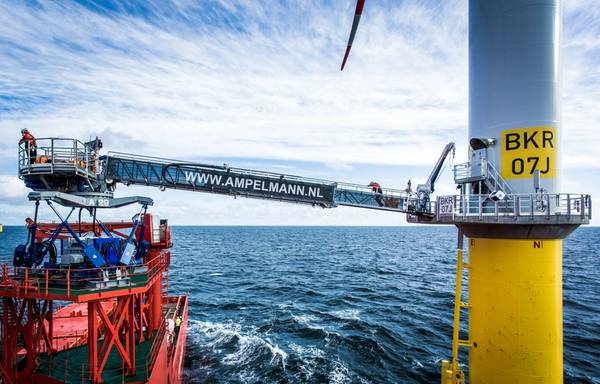 The Netherlands-based company will provide two A-type and three E1000 systems, which will aid the installation and maintenance work at offshore wind farms in the North Sea.

"In total, this will add up to 380 days of firm work, with possibilities to extend," Ampelmann said. The company has so far transferred more than 6 million people and close to 14 million kilograms of cargo to and from offshore platforms.

Commenting on new deals, Caspar Blum, Business Development Manager Offshore Wind at Ampelmann said: “It is not the first time that we are working with these key players in the European market. The fact that they have turned to Ampelmann for safe offshore access again is proof of the value of our systems.”

The A-type systems can transfer crews offshore in sea states up to 3m Hs. The E1000 is a heavier system with a wider range allowing it to operate in even rougher waters, Ampelmann said. The company is also building the E5000 system, which will be able to lift up to 5 tonnes.

Looking ahead, Blum expects a lot more work in the offshore wind sector.

He said: “We believe that in the next 10 years, there is potential for about 30 new Service Operation Vessels (SOVs) to be built around the globe. Many of those vessels will be looking for a safe and efficient means of offshore access and we are prepared to meet the demand with the development of our new system tailored to SOVs."