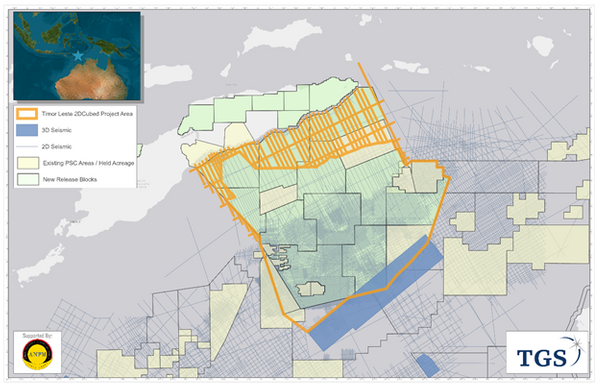 The seismic project combines all available open file and TGS multi-client data across an area of over 50,000 square kilometers and incorporating over 2,500 lines and existing 3D’s within the planned area. The 2D data, from over 45 legacy vintages, covers the entire offshore area south of Timor-Leste where the 11 offshore blocks in the second license round are located.

"The final multi-client 2Dcubed data will be unrivaled in its comprehensive coverage, allowing customers to develop structural and geological models in their pre-study evaluation process using a single conformable 3D volume, imparting confidence in their license round decision-making processes and supporting further exploration," TGS said.

Talking about its 2Dcubed technology, TGS said the tech was unique and used for generating a 3D seismic migration volume from a set of 2D and 3D seismic lines.

"It uses an advanced structurally conformable interpolation algorithm to maximize the potential of existing 2D multi-vintage and 3D data. The volume can be used for regional interpretation and optimization of 2D survey designs and positioning."

"The very high density of the available 2D legacy data offshore Timor-Leste lends itself to maximizing the effectiveness of 2Dcubed, which also merges local 3D surveys, where available. Similar projects have been undertaken in other Asia Pacific basins in Indonesia and Australia to industry acclaim, as well as offshore Sakhalin, Russia, and throughout the Norwegian and UK North Seas," TGS said.

The availability of the first deliverables is expected from July 2020, with final deliverables estimated around September 2020, TGS added.

"This will allow E&P companies ample time for data evaluation prior to the closing of the license round, which is anticipated to be during the first half of 2021," TGS said.

Kristian Johansen, CEO at TGS, stated: “By making our 2Dcubed product available covering offshore Timor-Leste, we believe we are offering E&P players the most cost-effective de-risking tool to evaluate the available license round acreage on offer using a 3D seismic data volume. This will be key to companies seeking to develop opportunities to invest in the oil and gas potential of Timor-Leste in the coming years.”