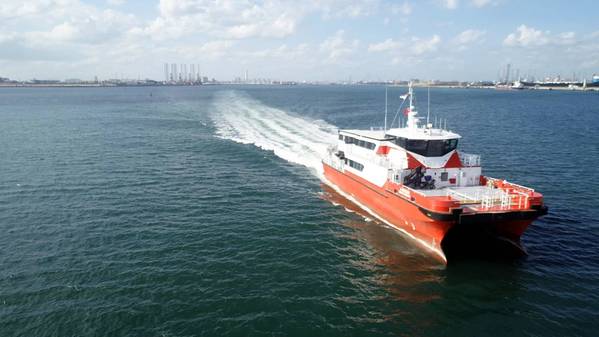 The first-of-its-kind vessel was designed by BMT and built by Penguin Shipyard International. It is engineered to provide long-term offshore accommodation for 10 crew onboard for the 12 day offshore endurance, while still being able to push up against the turbine to transfer technicians. The new concept will fill a gap where a full size SOV (service operation vessel) would be unsuitable and too expensive, BMT said.

The hull form is based on BMT’s ModCat range which offers improved seakeeping performance, but with a minimal resistance penalty, the company said. The improved vessel motion is also complemented by a full active ride control system.

The design also boasts the third generation of BMT’s patented Active Fender System, engineered specifically for larger vessels like the SATV to land on wind turbine generators with a reduced impact load enabling the safe transfer of service technicians onto the towers. All sleeping accommodation are above the main deck where noise levels will be kept to a minimum through the use of a resiliently mounted super structure.

Powered by twin MTU 16V2000 engines that are coupled with a CPP propulsion system supplied by Servogear, to optimize fuel efficiency during different modes of operation. The new 36m SATV will travel at a sprint speed of 20 knots and cruise at a speed of 16 knots, with a deadweight capacity of 75 metric tons.