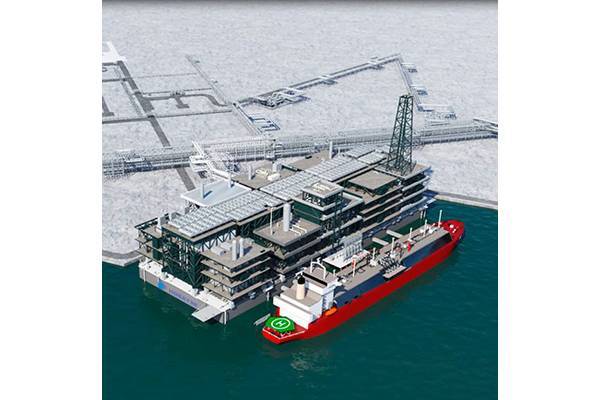 Illustration; A tanker next to the gravity based structure being built for Novatek - Credit: Novatek

Russia's Arctic region of Murmansk plans to build a new temporary hospital in a village where a vital liquefied natural gas supply plant is being built after an outbreak of the new coronavirus.

Murmansk governor Andrey Chibis said the authorities had contained the outbreak in Belokamenka, where Russian gas producer Novatek is building the plant, and construction of the plant had not been suspended.

But the Murmansk region, which borders Finland and Norway, must be prepared for a possible second wave of the virus, he said.

"We clearly understand that the virus is likely to stay for a long time," Chibis told Reuters by telephone. "We are preparing for a (possible) second wave ... opening up a temporary and fully-equipped hospital with nearly 700 beds."

The hospital is expected to cost around 1 billion roubles ($14 million) to build in Belokamenka, officials said, and will be funded by an emergency transfer from the federal budget.

Its construction underlines not only the health concerns in many areas far from Moscow, the Russian region with the most coronavirus cases, but also the importance of LNG for the world's biggest country.

The plant under construction at Belokamenka is intended to produce gravity-based platforms for Novatek's future LNG facilities and is vital to the company's plans to produce as much LNG as Qatar by the end of this decade.

More than two-thirds of the nearly 3,000 confirmed coronavirus cases in the Murmansk region were reported in Belokamenka, where 11,000 people are employed by Novatek as sub-contractors.

Belokamenka, on the Kola Bay, already has a temporary hospital to mass-test and treat workers and a cruise ship, which usually takes Russians on trips across the Baltic Sea, has been turned into a hotel for healthy staff, Chibis said. ($1 = 70.8950 roubles)