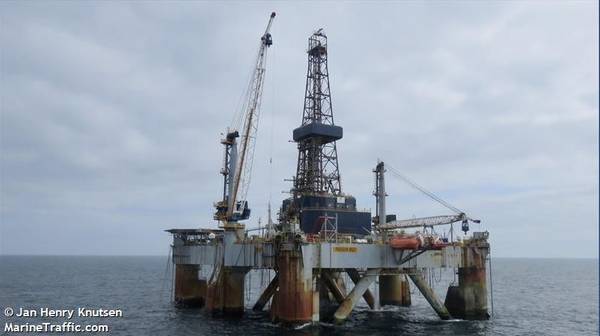 The MSS1, Borr's only semi-submersible rig, has been sold for scrap - Image by Jan Henry Knutsen - AdobeStock

Jack-up drilling company Borr Drilling has started talks with creditors and shipyards to defer certain payments and is looking to sell some modern drilling rigs to boost its liquidity.

The company has said it has executed a company-wide cost-cutting plan to reduce annual operating and G&A expenses by a further $35 million, due to the weaker short-term outlook for oil prices and offshore activity.

Borr Drilling has recently sold "B152" and "Dhabi II" rigs for total proceeds of $15.8 million. Earlier this week, the Oslo-listed company signed an agreement to sell the "MSS1," its only semi-submersible drilling unit, for recycling for proceeds of $2.2 million.

In a statement on Wednesday, it said it continued to be involved in other tender processes "which might lead to sale of some modern assets, with the target to further strengthen the liquidity position.

According to the company's fleet status report issued on Wednesday, the company had 31 rigs in total (not counting the MSS1), all jack-ups, of which 12 operating or committed, 11 available, 3 cold stacked, and five under construction with Keppel in Singapore (of which three slated for delivery in 2020).

Borr said it has, in response to the weakening market, entered into talks with its lenders and shipyards "with the target to lower the company's cash break-even rates for the next two years and thereby significantly strengthen the company's liquidity situation."

"The lenders and shipyards recognize the current challenging environment. Significant progress has been made based on a proposed arrangement with lenders including shipyards which includes postponement of certain yard commitments, adjustment in covenants, and reduced amortization as well as deferring cash interest payments," Borr Drilling said.

"These discussions are showing material progress, and the board expects the process to be finalized in the near-term," the Chairman of the Board, Paal Kibsgaard said.

Two-Year Runway Even Without New Contracts

Borr said that its management believed that the solution being worked on with the lenders and shipyards if concluded, would give the company a runway for the next two years "even in the unlikely scenario where no new contracts are obtained or renewed."

At the end of the first quarter of 2020 and into the second quarter 2020, the Company also received certain waivers from its lenders, including a waiver of its minimum free liquidity threshold as well as interest payment deferrals, the company said.

In order to reach an agreement with the shipyards and the creditors, Borr Drilling is contemplating to offer up to USD 30 million in new depositary receipts representing the beneficial interests in the same number of the Company's underlying common shares, each with a par value of USD 0.05.

Borr Drilling said the plan was to improve the liquidity until the beginning of 2022 by USD 315 million, and lower the Company's cash bareboat
break-even rate to $20k/day until the end for 2021.

"This number is calculated based full SG&A, stacking and cash interest cost. This number is based on only 12 out of 23 rigs delivered rig being in operation," Borr Drilling said.

Borr in April announced early contract terminations contract for several offshore rigs, including the suspension of contracts with ExxonMobil for the rigs “Gerd” and “Groa”, which were working in Nigeria under contracts originally committed until April 2021 and May 2021, respectively.

In a statement on Wednesday Borr shared more info on the Exxon termination: "The rigs will be suspended from the original contract with the possibility to return to operations. The rigs discontinued operations in May 2020, however, they will receive dayrate payments for the period until mid-September 2020, and we expect to reach an agreement to receive this as an upfront lump-sum payment shortly. The Company expects to export the rigs from Nigeria in May/June 2020, and it is estimated that approximately $30 million in import guarantees will be released, freeing up commitments from financing banks."

In addition to the already announced terminations, Borr said Wednesday that the “Mist” jack-up had received a notice of termination of its contract from the independent Australian oil company Roc Oil for work in Malaysia, which had estimated start-up in May 2020 for an estimated duration of 210 days.

In February, before the global pandemic outbreak and the historic drop in oil prices, Borr Drilling's Chairman of the Board, Paal Kibsgaard said the company expected the global jack-up rig count to significantly surpass 400 units in the next twelve months.

Here is his updated forecast, released Wednesday: "Looking at the total jack-up market, the number of contracted units have decreased from 387 to 371 units in the last 2 months, as a result of the COVID -19 pandemic, and we expect this number to reduce further.

"However, as global oil demand is anticipated to rebound in the coming year, we expect that some of the supply reductions and shut-ins will be slower to recover. This could lead to the development of a more constructive oil market over the course of 2021 and a subsequent improvement in offshore drilling."