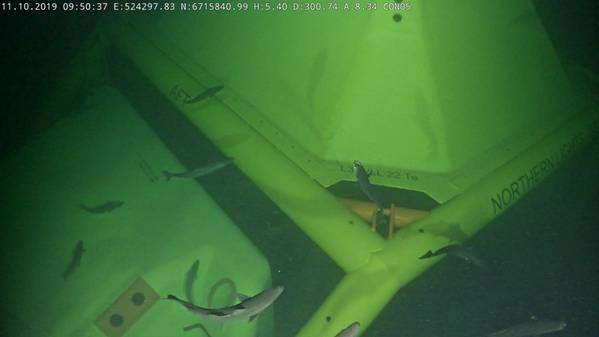 The Northern Lights template on the seabed (Photo: Equinor)

A group of European energy companies led by Norway's Equinor agreed on Friday to develop jointly a facility beneath the North Sea to store carbon dioxide storage, a technology that helps in the fight against climate change.

The Northern Lights carbon capture and storage (CCS) project, a partnership with Royal Dutch Shell and Total, is expected to cost 6.9 billion Norwegian crowns ($675.23 million), Equinor said in a statement.

The project is still subject to final approval by Norwegian authorities.

CCS technology includes pumping heat-trapping carbon dioxide from the air and injecting it into underground storage, and in some cases re-using it for industrial purposes.

The Northern Lights project's first phase will include developing capacity to transport, inject and store up to 1.5 million tonnes of CO2 per year some 2,500 metres below the seabed.

Equinor in September signed a number of non-binding agreements with major European industrial groups including the world's leading steel producer ArcelorMittal to develop infrastructure to supply CO2 to the Northern Lights.

The United Nation's Intergovernmental panel on climate change has said CCS will be needed to help avoid the most devastating effects of climate change and prevent global temperatures from rising above 1.5 degrees Celsius from pre-industrial levels by the end of the century.

Oil and gas companies face one of the biggest downturns in the sector's history following a sharp drop in oil consumption due to the novel coronavirus.

The approval of the project comes after Equinor, Shell and Total all set out in recent months ambitions to sharply reduce carbon emissions by 2050 in order to meet the 2015 Paris climate agreement.

It is also a sign that a major industrial project should go ahead in Norway, which like other European nations is trying to help its economy recover from the impact of the coronavirus and develop in a greener way.