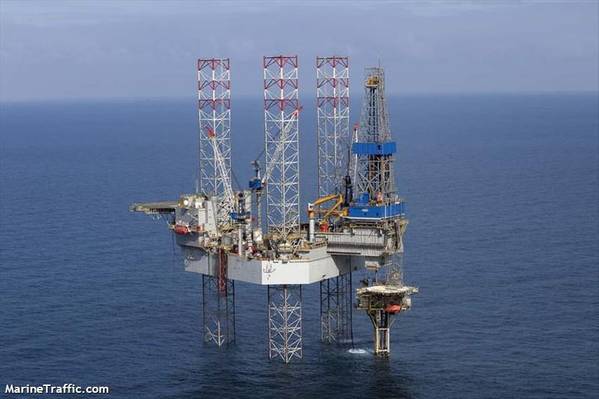 Offshore drilling company Noble Corp has said that its jack-up rig Noble Scott Marks, located offshore Saudi Arabia, will be suspended at the request of its client.

The rig is on a contract with Saudi Aramco, which, as Noble Corp. said in April, had recently requested for Noble to reduce the rig's dayrate from $159,000.

The offshore drilling contractor said Wednesday that the client had suspended the rig for a period of up to 365 days, with the suspension starting in the first half of May following the conclusion of the well in progress. It did not provide info on the previous dayrate reduction request.

"During the suspension period, no dayrate will be paid. However, the company has the right to market the rig in pursuit of other work opportunities in the region," Noble Corporation said. The rig has a contract with Saudi Aramco until late October 2022.

Noble Corporation on Wednesday posted a net loss for the first quarter of $1.1 billion, or $4.25 per diluted share, on total revenues of $281 million.

Results for the first quarter included a pre-tax non-cash charge totaling $1.1 billion relating to the impairment of the semisubmersible rigs Noble Danny Adkins and Noble Jim Day, the drillships Noble Bully I and Noble Bully II, and certain capital spares.

Evercore hired to advise on options

Noble's long-term debt at the end of the quarter stood at $3,69 billion. At March 31, 2020, the company reported an estimated revenue backlog of $1.5 billion, including $1.0 billion resulting from the floating fleet and $500 million from the jack-up fleet. The company concluded the first quarter with cash and equivalents of $176 million.

Noble Corp. CEO Julie J. Robertson said Wednesday the company had hired Evercore as a financial advisor "and are actively working with them to evaluate alternatives to enhance our liquidity position and reduce our total amount of debt and corresponding interest costs."

"These alternatives include, but are not limited to, potential capital exchange transactions as well as a more comprehensive debt restructuring," Roberton said.

Hard to predict the length of the downturn

In its quarterly statement, Noble said it continually monitors compliance with the covenants under our 2017 Credit Facility and its senior notes.

"While we are in compliance with all covenants today, the negative impact on our financial condition of the oversupply of oil, and the substantial decline in demand for oil as a result of COVID-19 and related mitigation steps, raises significant uncertainty as to whether we can remain in compliance throughout 2020," Noble said.

Commenting on the state of the offshore drilling industry, Robertson, said: "The reduction in demand as a result of the COVID-19 pandemic and the precipitous escalation in global crude oil supplies have placed the oil and gas industry in a state of heightened duress. The consequences of this combination of detrimental events are increasingly visible, and the offshore drilling industry will endure another period of depressed business activity for a duration of time that remains difficult to forecast."