Eastern Mediterranean-focused gas group Energean said on Thursday a report showed its Karish North field contained around a third more gas and oil than it had previously thought.

The Karish North field, according to an expert report typically used in the industry, contains so-called 2C resources of 34 billion cubic meters of gas and 39 million barrels of oil.

Energean has commissioned an 8 billion cubic meter per year floating production, storage and offloading (FPSO) vessel, which sailed from its initial construction yard in China this month. It has already secured contracts for around 5.6 bcm a year. 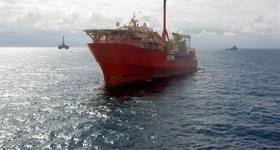