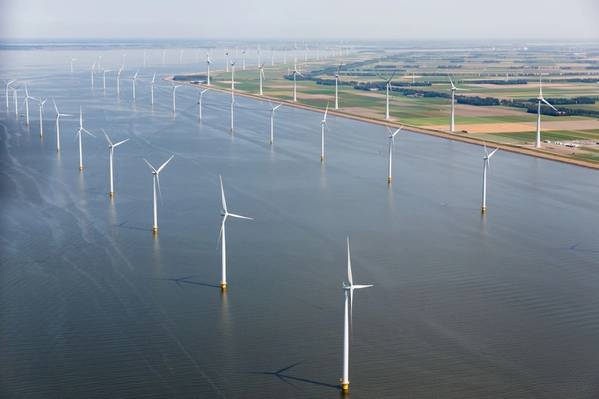 A consortium of Gasunie, Groningen Seaports, and Shell on Thursday announced plans to build a massive green hydrogen plant in Groningen.

The project, dubbed Europe's largest green hydrogen project, and named the NortH2, envisions the production of green hydrogen using renewable electricity generated by a mega offshore wind farm, 3 to 4 gigawatts in 2030. Furthermore, it has the ambition to grow to about 10 gigawatts around 2040.

Green hydrogen production, initially in the Eemshaven and later possibly also offshore, is expected to be around 800,000 tonnes per year by 2040.

This would avoid about seven megatonnes of CO2 per year. NortH2 has the support of the province of Groningen and is looking for partners to expand the consortium and realize this project, the companies said in a statement.

"Green hydrogen, produced with renewable sources such as wind and solar energy, is central to the Dutch Climate Accord and the European 'Green Deal.' At present, the industry is already using large quantities of hydrogen, but this mainly produced from natural gas. Replacement with green hydrogen contributes significantly to the decarbonization of the industry," the statement further reads.

"First of all, NortH2 envisages the construction of very significant wind farms in the North Sea, which can gradually grow to a capacity of about 10 gigawatts. This would be sufficient to meet the current electricity consumption of some 12.5 million Dutch households. Many wind turbines will need to be installed to enable this. The first ones could be ready in 2027 and will be used for green hydrogen production," the companies said.

In addition, the plan provides for a large electrolyzer in the Eemshaven, where wind energy is converted into green hydrogen. The consortium is also considering the possibility of placing electrolyzers offshore.

Finally, a smart transport network in the Netherlands and Northwest Europe is required to deliver the 800,000 tonnes of green hydrogen to mainly industry, and later possibly also to consumers. This could save an estimated seven megatonnes of CO2 emissions per year around 2040. In this project, Gasunie's natural gas infrastructure – which is now mainly used for natural gas and green gas – is also used for the storage and transport of hydrogen.

Marjan van Loon, President-Director of Shell Nederland: "Together, we are launching an ambition that puts the Netherlands at the forefront of hydrogen globally. In addition, it contributes to achieving the objectives of the Dutch Climate Agreement and accelerates the energy transition. This project offers opportunities throughout the entire hydrogen chain.

In addition, he said, the project fits well with Shell's New Energies aspirations and its ambitions to find new ways to reduce CO2 emissions.

"In order to realize this project, we will need several new partners. Together we will have to pioneer and innovate to bring together all the available knowledge and skills that are required. The energy transition calls for guts, boldness, and action," Van Loon said.

The project is expected to start this year with the kick-off of a feasibility study. If the outcome is successful, the consortium hopes to produce the first hydrogen by 2027.