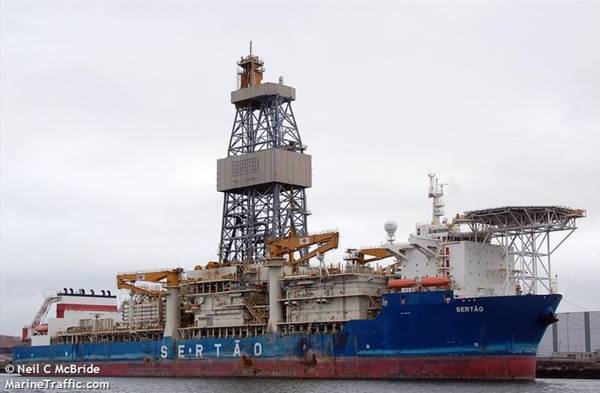 Turkish President Tayyip Erdogan has reportedly confirmed that the country, through its national oil company TPAO, has expanded its offshore drilling fleet with another drillship.

TPAO has been using its two drillships the Fatih and the Yavuz – bought in 2017, and 2018, respectively, -  to drill in the contested waters claimed by Cyprus, in the eastern Mediterranean. The drillships were previously known under the names Deepsea Metro II and Deepsea Metro I.

According to a Reuters report, President Tayyip Erdogan said on Wednesday that Turkey had purchased its third offshore drilling ship which would arrive in Turkey in March and that it would begin operations in 2020.

While the Reuters report did not provide details on the rig purchased, data from Norwegian rig brokers Bassoe Offshore shows that TPAO has bought the Sertao drillship for a reported sum of $37.5 million.

Another source, VesselsValue, also shows the $37.5 million sum was paid for the 6th generation offshore drilling rig. According to VesselsValue, the 2012-built drillship was sold to TPAO at an auction.

The Sertao drillship, built by South Korea’s Samsung, was previously owned by Brazil’s Schahin Group and was used by Petrobras for drilling operations offshore Brazil. The rig was taken over by Dleif in 2015 following Schahin’s bankruptcy.

Dleif had been working to find a solution for the rig ever since the acquisition. The company in November 2016 rejected a $75 million offer for the drillship from Magni Drilling, now known as Borr Drilling.

Per Reuters, Erdogan was speaking this week to lawmakers from his ruling AK Party in Ankara, and said the drillship was "an ultra maritime drillship that can drill down to 11,400 meters but did not specify where the ship would operate."

Information available online shows the rig’s SPS was due in early 2017, but the process was delayed to the rig’s layup status. Per Marine Traffic, the drillship is currently anchored in Port Talbot, UK.

Turkey, one of the largest energy consumers in the region, is stepping up offshore exploration activities hoping to find hydrocarbons and reduce its imports. According to an OECD note from April 2019, Turkey relies on imports to meet more than 80% of its total energy demand.

An IEA brief on Turkey has stressed that Turkey's reliance on natural gas use has grown along with rising oil and gas imports, leaving the Turkish economy increasingly exposed to the volatility in oil and gas prices. The International Energy Agency, has, however, pointed to LNG and its declining prices as an opportunity for Turkey to diversify its sources of supply.