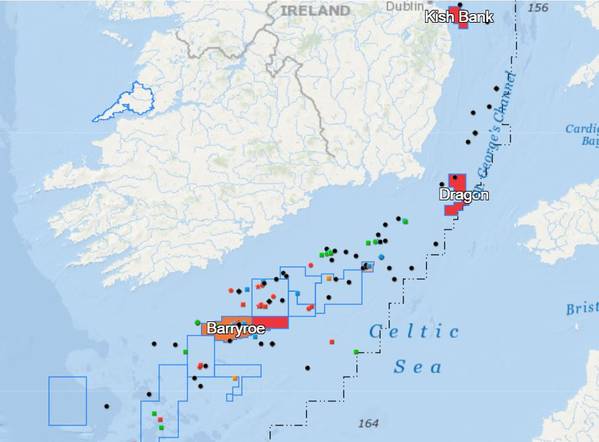 Ireland-focused oil company Providence Resources is on the lookout for a new farm-in partner for its Barryroe field following a botched farm-in saga with China's APEC.

Providence said Thursday that its subsidiary Exola DAC, which is the operator of the Barryroe offshore field had notified APEC that it had started a process to transfer the 50% equity in the offshore block from  APEC, back to the original owners.

This will result in Exola DAC and Lansdowne Celtic Sea Limited reverting to their original 80% and 20% interest, respectively, on completion.

As previously reported, Providence and its partner Lansdowne had in 2018 agreed to farm-out a 50 percent working interest in the in SEL 1/11 license offshore Ireland, containing the Barryroe field, to a Chinese consortium led by APEC Energy Enterprise, a privately-owned Chinese company which has a strategic partnership with China Oilfield Services.

The terms of the agreement called for APEC to pay for 50% of all the cost drilling of 3 vertical wells, plus associated side-tracks and well testing, and to provide a drilling rig.

APEC was also expected to provide an advance loan of $9 million, to be used for a survey and pre-well consenting for the Barryroe.

However, after several delays and excuses, the loan never ended up on Providence's bank account. Providence then in October 2019 said it would pursue other partners for Barryroe.

Providence, which last month appointed new CEO, said Thursday that Exola has resumed the farm-out process and that “a number of companies are actively assessing the field data.”

“Following the company’s review of the field’s resource potential, which confirms that there is a considerable gas resource within the Barryroe structure in addition to the recognized oil resource, which was the original focus of the farm-out process, several additional companies not included within the initial process have expressed interest in the gas potential and have been invited into the data room,” Providence said.

According to Providence, the independently verified reports of the hydrocarbons recoverable within the Barryroe field concluded that a mid-case of 346 MMBOE of 2C resources was present within the Middle and Basal Wealden sands.

Providence needs a partner to help it fund the planned work program at Barryroe. The company currently has the cash to fund its costs through to the end of March / early April 2020, and the board is considering funding options.

The oil and gas company has also shared that it is assessing the possibility for a carbon-neutral gas development as an option for the Barryroe field.

"Several nearby depleted gas fields are being prepared for decommissioning, and a number of industry studies have assessed their potential for carbon sequestration (CO2 storage within the depleted gas fields). It may be possible to minimize the carbon footprint of a Barryroe development by recycling some of the existing pipelines and infrastructure associated with the depleted fields and participating in a broader carbon capture initiative," Providence said.