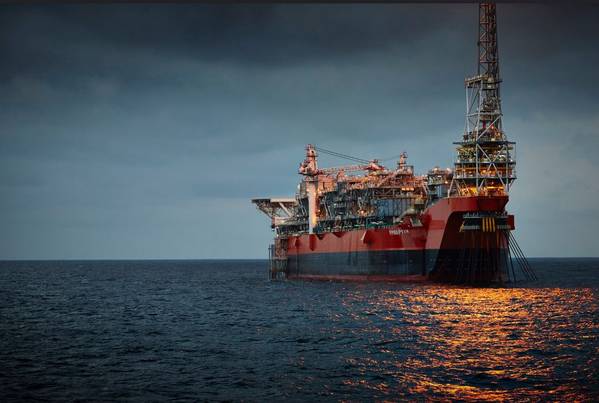 A sunset view of the illuminated PSVM (Plutão, Saturno, Venus and Marte fields) FPSO - located NE of Block 31 in Angola - Image by BP

Oceaneering, which has described the contract award as meaningful, will provide the services at BP's offshore Angola Blocks 18 and 31.

Under the agreement, Oceaneering will provide personnel and equipment related to its RLWI services, remotely operated vehicles (ROV's), survey services, and communication services integrated onto a chartered multi-purpose vessel.

"These services are contracted to support a multi-well campaign designed to include mechanical well interventions, well stimulations, and tree change-outs," Oceaneering said.

The subsea services firm did not share the financial details of the agreement, but said the value "of this meaningful award is reflected in our December 31, 2019 Subsea Products backlog." Oceaneering is set tor reveal its Fourth Quarter and Full Year 2019 on Monday, February 24.

Commenting on the deal with Oceaneering,  Jim O'Leary, VP Wells, Africa and Middle East, BP, said: "Oceaneering has a proven track record of providing us with a much-needed RLWI rapid response solution to help restore and improve production in Angola.  We look forward to working with Oceaneering on this campaign."

Rod Larson, President and Chief Executive Officer of Oceaneering: said, "We appreciate BP's continued trust in our ability to provide them with reliable, cost-effective, ultra-deepwater intervention solutions in Angola."

Larson said that the BP deal was the latest example that performing RLWI from a multi-purpose vessel is a viable, more efficient alternative for production enhancement compared to performing similar services from a rig or purpose-built intervention vessel.