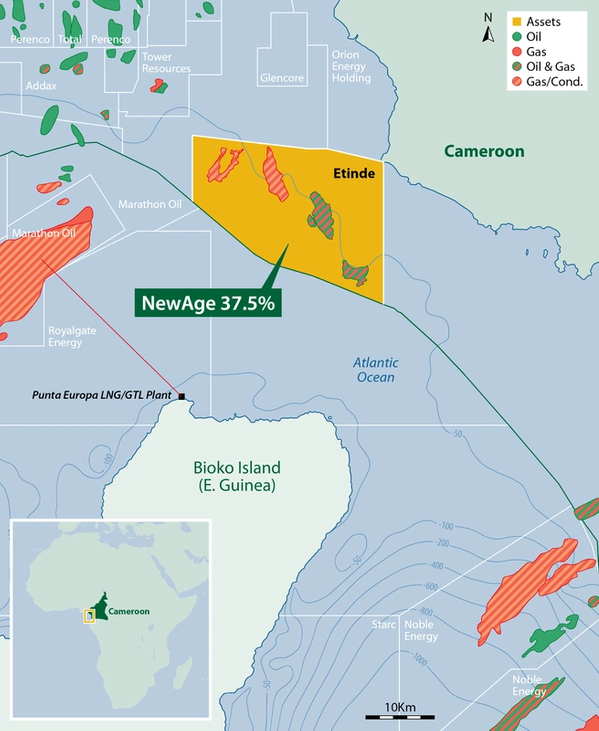 New Age, the operator of the Etinde gas and condensate field offshore Cameroon, has signed a letter of intent with Victoria Oil & Gas for the supply of gas from the field.

According to Bowleven, a partner in the Etinde field, the letter of intent envisages that New Age will supply processed gas to Gaz du Cameroun S.A. ("GDC"), a wholly-owned subsidiary of Victoria Oil & Gas Plc, at Limbe. GDC would then transport the gas to Douala.

Bowleven said the letter of intent remains in force until the signature of a gas sales deal, expected to occur by March 31 2021. The finalization of the proposed deal is subject to a  Final Investment Decision being made for the Etinde field development.

GDC has commenced negotiations with multilateral and export credit agencies to fully debt finance this new pipeline project.  The Parties are currently negotiating a fully termed GSA and subject to signing, anticipate a Final Investment Decision by the Parties on the project during H2 2020.

Eli Chahin, Chief Executive Officer of Bowleven plc, said:" As we work towards making a final investment decision on Etinde this year, today's announcement by VOG is a positive step towards reconfirming the commerciality of the license. The agreement is also positive for Cameroon, as it will see gas delivered to independent power suppliers in the country, and for our stakeholders, as it demonstrates the high demand for natural gas in the region. We look forward to updating the market on future progress as appropriate."

New Age is the operator of the project with a 37,5% stake. The other partners are Lukoil (37,5%), and Bowleven (25%). According to info on New Age's website, the first production from the field could be expected in 2022.

Also, in a separate statement, Victoria Oil & Gas said that, to access Etinde gas, GDC will need to install a 60 km high-pressure gas pipeline from Limbe to Bekoko where it would connect with the existing low-pressure pipeline network which operates throughout Douala. The pipeline would be designed to allow for future expansion in Douala and the South-West region.

Victoria Oil & Gas said: "The installation of a major gas pipeline network from Limbe to Bekoko will provide numerous additional opportunities, which would have otherwise been deemed uneconomic, to supply gas into smaller towns along the route into Douala, such regions/towns as Ombe, Mutengene, Tiko, and Buea, and provide much-needed power using smaller gas-fired power plants."