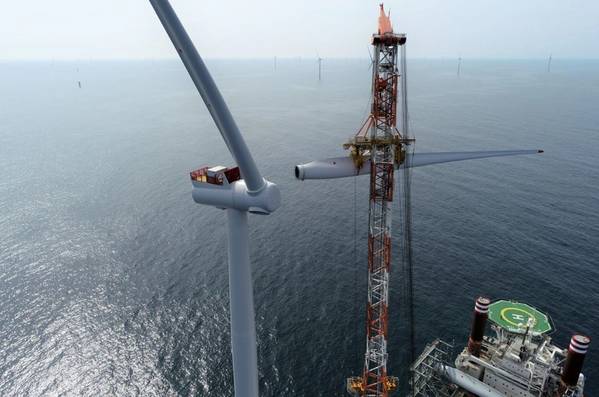 Offshore wind farm developer Orsted has set out a plan to work with its service suppliers to decarbonize the supply chain by 2040.

The move follows the Danish company's last week's commitment to becoming carbon neutral by 2025, and becoming "the first major energy company to reach net-zero emissions in its energy generation."

In a statement on Tuesday, announcing its program to make the supply chain carbon-neutral, Orsted said: "Orsted's carbon footprint is comprised of two parts - the company's own emissions from energy generation and operations; and the emissions from the energy traded by the company and the goods and services in its supply chain.

"On track to be carbon neutral in energy generation and operations by 2025, the company wants to cut energy trading and supply chain emissions in [sic] half by 2032 and then down to net-zero emissions by 2040.

To decarbonize the supply chain, Orsted will engage its strategic suppliers in the most carbon-intensive categories: the manufacturers of wind turbines, foundations, substations, and cables.

"These are produced using steel, aluminum, and copper, among other materials, which are energy-intensive to extract and manufacture. The second-largest source of supply chain emissions is the fossil fuels used by the maritime vessels that transport and install offshore wind components," Orsted said.

"Reducing emissions in the renewable energy supply chain is a significant task. Businesses will need to collaborate across supply chains to cut emissions at the pace and scale demanded by science. We now reach out to our industry-leading suppliers to join forces to accelerate the global green transformation," says Henrik Poulsen.

In its supplier engagement program, Orsted will ask its strategic suppliers to disclose their own emissions and set science-based carbon reduction targets; use 100% renewable electricity in the manufacture of wind turbines, foundations, cables, substations, and components,
optimize their current vessel fleet and develop a roadmap to power vessels with renewable energy.

Orsted has said it has more than 22,000 suppliers, with strategic suppliers constituting 50% of the company's total procurement spend.

The company has also said it will encourage its remaining suppliers to reduce the carbon impact of their goods and services and is strengthening the sustainability criteria in the company's procurement tenders.