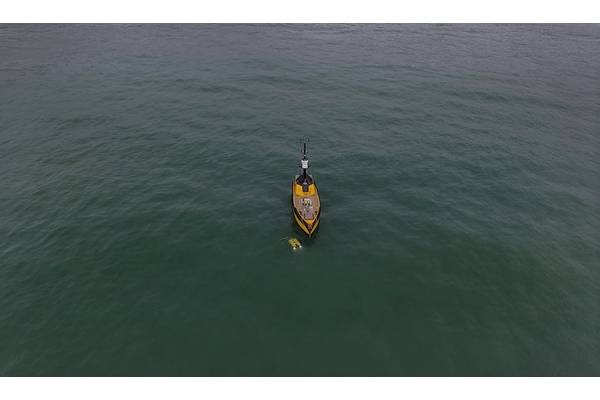 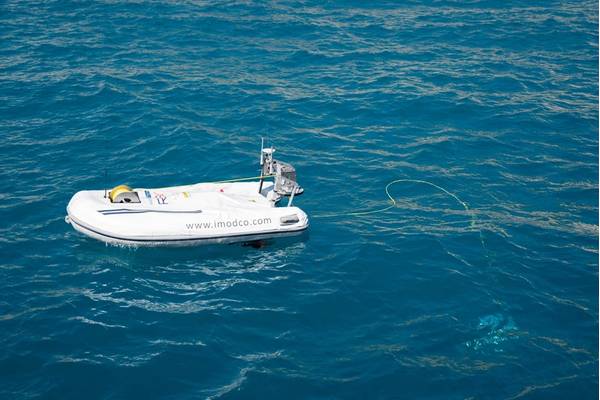 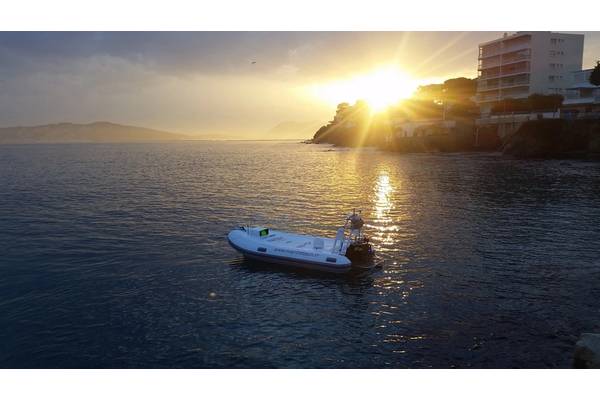 Marine Tech has commercially deployed its RSVs with ROVs since 2018 in the Middle East. Photo from Marine Tech.

Concepts like resident subsea vehicles, for inspection, repair and maintenance, are attractive options, but not the only ones being tried. Deploying remotely operated vehicles (ROVs) from unmanned surface vessels (USVs) are also being tested and put to use. It’s another way to take operators out of harm’s way, centralize operations and cut costs and environmental footprints. But, there’s a way to go until these systems can face the harsh conditions of the likes of the North Sea.

French firm Marine Tech has been combining USV and ROV capabilities, with commercial success since 2017. Those behind the firm, which was founded in 2014, have been providing what they call remote surface vessels (RSVs) into the oil and gas industry since 2012, in marine survey operations in the Middle East.

Marine Tech started investigating the possibility of adding ROV capabilities to its RSVs in 2016, through a project with Abu Dhabi’s National Petroleum Construction Company (NPCC) Survey & Diving team. NPCC wanted a solution for survey and monitoring missions, including in hazardous or restricted areas, that could launch and recover an ROV.

Magali Mouries, a co-founder of Marine Tech and also its Commercial Manager, says, “They wanted to save cost and improve the security of personnel and divers and to reduce the technical means that they have to deploy to carry out these missions. An RSV replaces divers and vessels and all the teams required to carry out these conventional missions.” 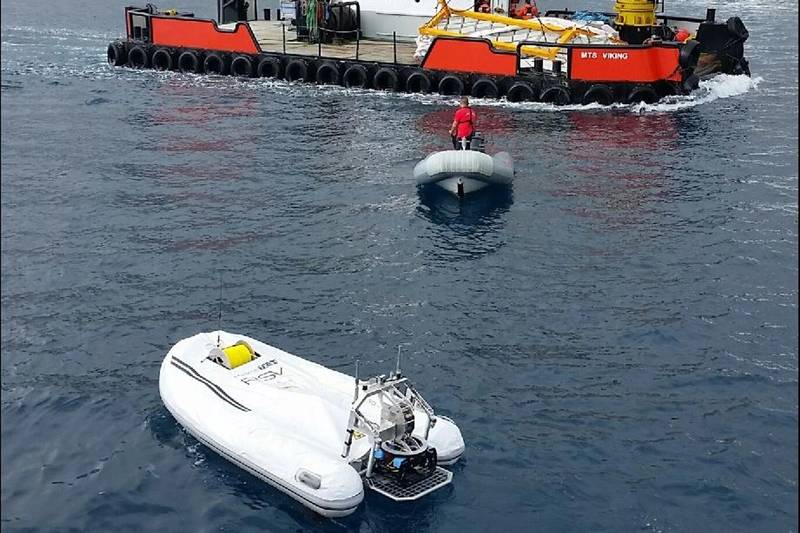 Marine Tech has commercially deployed its RSVs with ROVs since 2018 in the Middle East. Photo from Marine Tech.

The result was using their 4.2m-long, 2.1m-wide RSV Sea Observer with multibeam echosounder and a Teledyne Seabotix vLBV300 ROV on board, for visual inspection. The battery powered RSV, which has 24-hour endurance and can travel at 10 kts, was fitted with a winch, tensioning system and an articulated platform for ROV deployment, down to 100m water depth. Command and control is via UHF, using the same systems deployed on all Marine Tech’s RSV fleet, with Wi-Fi to recover data recorded by the onboard sensors. Communication between the ROV and RSV was part of the development, as well as the autopiloting with position keeping of the RSV and the ROV tether management.

Following demonstrations in 2017, the RSV, which can currently operate in up to 1.8m seas, became the first RSV (or ASV/USV) to be used offshore, says Mouries. It was put to use in the Zakum field, 16km off Abu Dhabi, inspecting pipeline, doing bathymetric surveys and deploying the ROV for a detailed inspection if something was discovered. It’s been working for NPCC ever since, says Mouries, an oceanographer by training, with 12 years’ experience in the marine environment and marine pollution.

While the vehicle is able to operate for 24 hours, including power drain from the ROV, it’s often not actually used for this long says Mouries, because survey/hydrographic works do not need to be carried out continuously, during all this time.

“This is the first and I think still the only one, with a young brother RSV Sea Observer Compact, operating,” Mouries adds. Indeed, following the work with NPCC, in 2018, Marine Tech has also delivered an RSV Sea Observer Compact, at 3.2m-long, with a BlueROV2 onboard to IMODCO (an offshore loading terminal technology firm owned by floating production technology company SBM Offshore). For IMODCO, it’s being used as part of the maintenance of offshore loading/offloading buoys, including single mooring line surveys. Again, it’s still being used since going into work two years’ ago.

“We’ve been working nearly 10 years in this field,” says Mouries. “We’ve produced more than 10 platforms into Europe, the Middle East and Asia, which is why we’re able to develop these kinds of platforms.” For more companies to adopt these technologies mindsets need to change, she says. “Industry has to be ready to change their process of work and it takes time to do that. The market is developing now, however. Minds are changing.”
Increasing autonomy in harsher environments

Indeed, BP has been looking at this technology. The company, which speaks of a goal to have 100% of its subsea inspection activities with unmanned systems by 2025, has been supporting UK-based USV manufacturer L3Harris UK on project called ARISE. It stands for Autonomous Robotic Intervention System for Extreme Maritime Environments, an Innovate UK part-funded project which involved the University of Exeter as an academic partner. 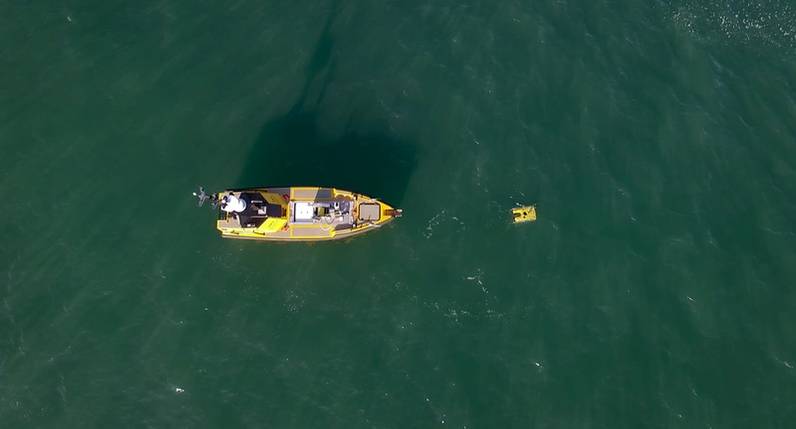 James Cowles, Commercial Technical Sales Manager from L3Harris UK, says doing autonomous subsea inspection takes the “dull, dirty and dangerous” work off humans. Instead of having a 24m-long vessel with people on, “bouncing around”, a 7m-long unmanned boat can be used. It’s also not just applicable to oil and gas, he says, but also offshore wind, where thousands of structures need inspecting, as well as the cables between them. It also reduces cost and increases repeatability, Cowles says.

Phase 1 of the ARISE project was a feasibility study, part funded by Innovate UK. This saw a Saab Seaeye inspection class Falcon ROV deployed from a C-Worker 7 ASV with a 2.5 x 1m moonpool. The ROV was kept in a hanger with a winch to pay out up to 50m of tether and a powered sheath wheel to maintain tension. All the electronics were in an electronic enclosure and kept separate from main control system. ROV control was treated it similar to other payloads, with a remote desk top connection via radio link, providing robust control of the ROV. The ROV was tracked using an Ultra-Short BaseLine (USBL) system.

This set-up was trialled in Cawsand Bay, Plymouth, early in 2019. There was also nothing to actually inspect in Cawsand Bay. So, L3Harris UK recruited Portuguese visualisation and simulation firm Abyssal to build a synthetic environment so there were things to “look at” on the seabed. The vessel pilots were able to oversee what was going on and BP staff from Sunbury, UK, or Houston, US, were also able to log-in and see what was happening. Ten dives were done in a fairy friendly sea-state 3 (slight). The dives included testing vertical inspection, getting to a site and hovering, flying the ROV by hand (from shore), putting the ASV on a heading hold and flying the ROV underneath, and testing a docking algorithm.

“One of the major challenges was the winch,” says Cowles. “An early learning was that if you don’t synchronise these, it does wrong quickly.” Also, there will not always be 10mb bandwidth offshore, says Cowles, and there can be times when the vessel is straight above the ROV making it hard to track. But, these are learnings, he adds. 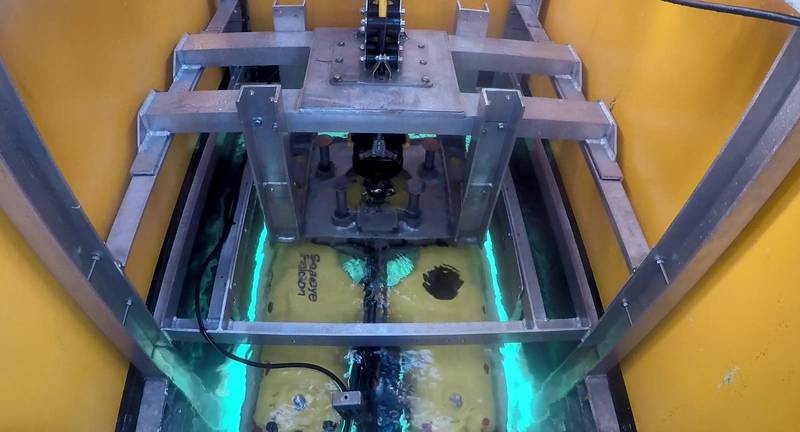 “At this stage, we just wanted to see it work, the next stage collaborative autonomy between vehicle and the subsurface vehicle,” he says. “So, the next step is to look at increasing automation and machine learning to generate paths to get back into its enclosure, way points, etc.”

The ability to work in sea states above three will also be needed, as well as a larger ROV, with a Tiger, also from Saab Seaeye, being eyed for the next trials, as part of Phase 2 of the project, scheduled for this year (2020), which is hoped will include a real inspection scope delivering data. L3Harris UK will also be looking to increase the ROV tether length to 275m, in order to operate in 150m water depth, which would cover 70-75% of the North Sea. Future systems will also incorporate line-cutting, in case the ROV tether gets caught and potentially becomes an anchor.

“The goal is a more robust launch and recovery system. We need to work in higher sea states to get the work window we need in North Sea and elsewhere around the world. And we need more autonomy,” says Cowles. The future could see an 18-24m vessel with a light work class ROV or larger AUVs.

The potential is there, says Cowles, citing an ability to have 20-day endurance with a USV-ROV combination. “You can leave Aberdeen or Peterhead, transit, do 10 days work and still have a significant reserve,” he says. “Even if the vessel needs a while to transit, that offers scope.” Questions remaining include who would pilot the ROV – the same person as the USV pilot, or not? Marine regulations also remain a question but L3Harris UK is working with the Maritime Autonomy Sustainability Regulatory Working Group (MASRWG). Cowles says that it appears that current collision regulations (Colregs) are probably fit for purpose for the current size ASVs. As vessels get bigger, however, we will need changes, he says.

Others see the potential too. XOCEAN, an Irish company, based in County Louth, Ireland, is also working on a solution to deploy underwater robotics from an unmanned surface platform. James Ives, the firm’s CEO, says, “Multiple clients have expressed an interest in extending the solution to deeper water to cover more of their assets. This inevitably means positioning sensors lower in the water column. XOCEAN is working on this next generation of technology to achieve this.

Others have been working on similar capabilities. Last year [2019], ECA GROUP, which mostly provides USVs with mine counter measures capabilities (to detect then destroy mine-like objects) demonstrated the capability of performing a subsea inspection using its USV (Unmanned Surface Vehicle) INSPECTOR deploying a H300V type ROV within a Research and Development program led by Total and TechnipFMC. MTR has reached out to ECA but had no response. 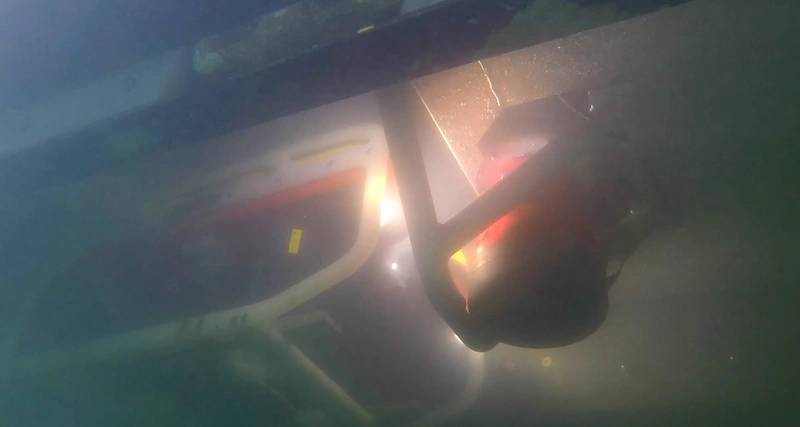 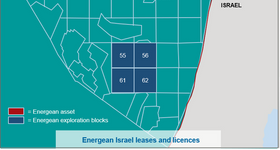