Bowleven Pushes Ahead With Etinde Despite Losses 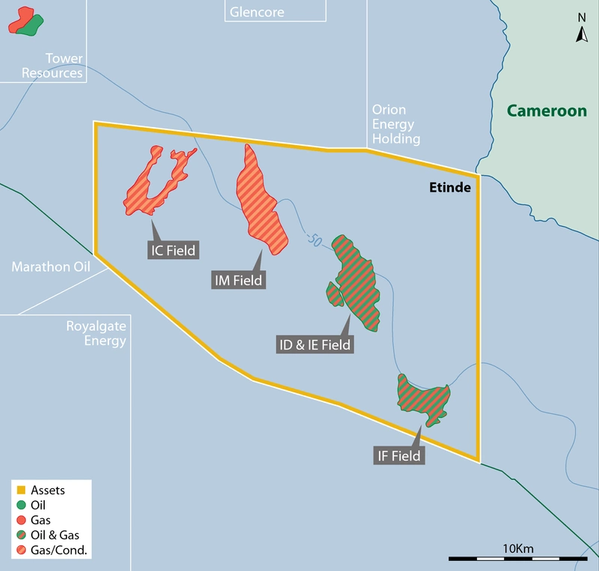 Africa-focused oil and gas explorer Bowleven Plc has vowed to soldier on with its planned monetization of the offshore Etinde field in Cameroon despite the company posting further losses in the last financial year.

Bowleven said last week it is inching closer to the development of the 461-square-kilometer Etinde field with a final investment decision (FID) now expected in early 2020 irrespective of the looming expiry of the asset’s permit in January 2021.

The company said in its annual results for the company’s year ended on June 30, which were released late last week, it will continue to carry out extensive pre-development works and the JV partners will “continue to hold collaborative workshops around the key commercialization issues.”

Bowleven, which holds a 25% equity in the licence that was awarded in July 2014, says currently, the Etinde block operator New Age, is calibrating the results from the 2018 Etinde drilling campaign to get a detailed picture of the asset’s potential.

The results, the company’s management said “reconfirmed the significant accumulations of hydrocarbons” and once analyzed would enable the JV partners “to fine tune our common understanding of the field in order to achieve consensus on the best-fit development plan.”

Bowleven’s partners in the shallow water Etinde field, formerly Block MLHP-7, include privately-held New Age, which is the operator with a 37.5% stake and Lukoil that holds 37.5% stake.

Company CEO Eli Chahin reiterated last week 2020 will be a year of narrowing down the focus “to ensure FID is underpinned by a compelling development plan, which is suitably robust to secure future capex funding during the financial year.”

Meanwhile, Bowleven, which says its offshore Cameroon strategy has realigned all its operations to focus on “prudent management of our balance sheet and acceleration of the path towards securing FID, alongside obtaining the necessary funding to ensure this project is successfully executed,” reported further losses for the year ended June 30, 2019.

The company posted total loss of US$66.6 million up from the US$7 million incurred the previous year, largely because of the impairment of the Etinde project.

“The valuation has been determined to be within a range, with a mid-point of $150 million, resulting in an impairment provision of $62 million against the Group's carrying value of Etinde,” said the company’s report.

The performance by Bowleven and JV partners resonates with the current global trends where according to the company CEO Chahin “hydrocarbon prices continue to be volatile as concerns over slower global economic growth heighten, impacted by lack of progress in the Us-China trade discussions and an increasingly unpredictable geopolitical backdrop.”

“Oil and gas demand growth remains fragile and the risks associated with low real wage growth and weak inflation has had an impact on sector investment,” said Chahin.

Although Bowleven did not generate revenues in the last reporting year, the company achieved some milestones in the planned development of Etinde project including sustaining ongoing extensive pre-Front End Engineering and Design (FEED) by several external engineering consultancies and equipment providers.

Also, the company has projected by the time the engineering design studies are complete, Bowleven and partners would then be at a position to analyse the engineering and commercial feasibility of the different Etinde project development options before agreeing on the “preferred development solution(s) in the near future.”

In the last financial year, Bowleven and JV partners were able to complete analyzing of “the data and samples collected for the two 2018 appraisal wells, which was followed up by a large scale exercise to remap and reassess each of the fields currently discovered in the Etinde licence area.”

In the runner-up to the release of the company’s latest financial results, Bowleven and partners had focused on the re-evaluation of the Isongo E (IE) field, where the IE-4 appraisal well was drilled by New Age Cameroon Offshore Petroleum SA (New Age), which reportedly “resulted in a much clearer understanding of the importance of existing discoveries and the prospectivity of the nearby undrilled prospects.”

“Recovery rates have been reassessed in light of current development options reducing the overall 2C contingent resources available for production to 244 million boe from 290 million boe on a 100 % basis,” Bowleven said.

Going forward, the Etinde block operator, New Age, is evaluating the asset’s development “with particular focus on the facilities necessary to undertake all aspects of the development.”