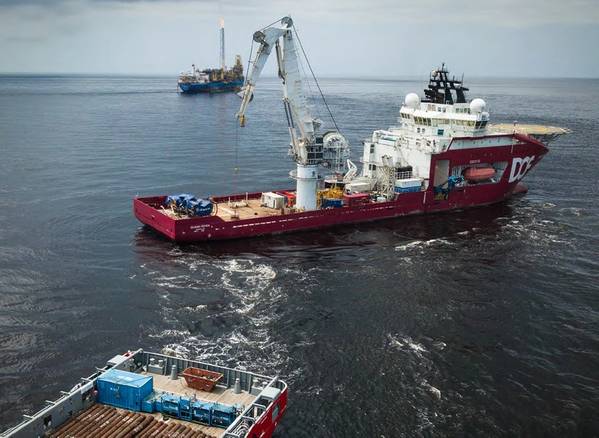 On Monday, Bergen-based subsea cable layer, Oceanteam, announced its vessel, or CSV BO 101, had been hired to hang around the Angolan offshore a little longer. Client Total extended the charter contract until at least mid-2020, although the operator has just wrapped up a long development drive in Block 17.

Angola — committed now to lower taxes and speedier clearance for supplier contracts after separating away offshore licensing from state player, Sonangol — says it is committed to new licensees bidding in November ahead of April 2020 acreage awards. Acreage awards in consecutive years are in the works for the first time in a decade.

For offshore fleets still clinging to financial lifelines after heavy investments in tech and fleet sizes, Angola is key to recovery. Africa’s second-largest oil producer represents a potentially vast new oil province that seems to have it all: subsea construction, floating producers, deep-water, ultra-deepwater, large reservoirs and a pending wave of decommissioning.

That potential has been on-hold, as the country succumbed to the general deepwater downturn since 2014. The malaise is only now lifting, and offshore fleet operators like hard-pressed Norwegian outfit, Solstad, report a doubling of demand for offshore service vessels in Angola between 2017 and the beginning of 2019.

Operator-ready
Brent’s sudden plunge from $85 to $52 in the last three months of 2018 left lingering doubts of recovery among fleet owners. So, a new Angolan acreage pact with oil company Eni and Total’s two-FPSO (floating production, storage and offloading unit) 230,000-barrel-per-day Kaombo deepwater project (completed 2018) have become beacons of hope that more is in the wind from these premier basins.

While “several hundred vessels” are still laid-up worldwide, Angola and its West and South African neighbors are dead set on doing all possible to bring activity back up to the “heyday” of 2013-2016. According to Baker Hughes historical data, February 2014 saw 18 drill rigs active offshore the once war-torn country.

In October 2019, there were just two. The signs, however, are very promising.

With much of Angola’s offshore mapped by WesternGeco and PGS and available to operators, the scene is set for rapid expansion. Eni’s agreement with Angola’s new National Oil, Gas and Biofuels Agency has led straightaway to an acreage deal with an Italian major boasting more FPSO experience than any other.

BP is also in. Last month drilling contractor Valaris said it had a four-well contract in Angola for its Valaris DS-12 drillship. Now, new acreage award announcements are scheduled to coincide with the start of BP’s 200-day drill campaign in April 2020.

It’ll be the first licensing round since 2011, and bids on 10 blocks in the Namibe and Benguela basins are already being scrutinized ahead of April awards that’ll be marked by the promise of better terms to counter ultra-deep costs. Pazflor, Girassol, Hungo, Kissanje and Plutonio — the discoveries that should have made Angola rich — might auger well for what Africa Oil Week noted were 55 new blocks being carved out in the Congo and Kwanza basins (10 this round and nine in the next).

Apart from Total, Eni and BP, there’s the lingering presence of ExxonMobil, Equinor and Chevron. Backing them up are TechnipFMC, Schlumberger and Weatherford.

That Oceanteam CSV BO 101 vessel with its cable-laying carousel — and other offshore support vessels (OSV) — await better business by maintaining an Angolan presence. And if Angola stalls again, there’s always Namibia to the south, where Bourbon will do logistics work for Bourbon serving Total, and other West African nations boasting new operator successes.

For now, Bourbon Marine & Logistics can cheer its Angolan extension and a newly coined smart shipping program with Total for five offshore construction vessels (OCV) slated to serve in Block 17 and Block 32. The cost-cutting tech is seen cutting offshore costs to the operator of 25%.

Keeping track of changes in West Africa might be difficult from now on, as these deepwater provinces are on-the-mend. After the North Sea, it’s West Africa where fleet owners expect recovery to be felt next.

That’s the consensus of OSV shipowners. Recent events back them up.