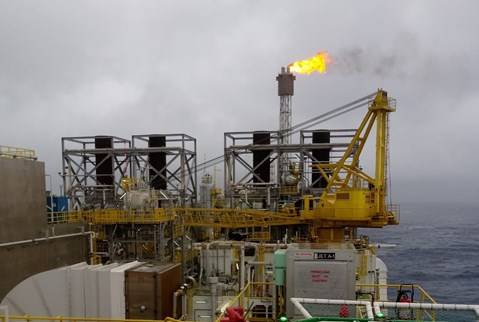 The Petrobras-operated P-68 floting production, storage and offloading unit (FPSO) has begun producing oil and natural gas from the Berbigão field, in the Santos Basin pre-salt, in the deep waters offshore Bazil.

With a capacity to process up to 150,000 barrels of oil daily and compress up to 6 million cubic meters of natural gas, the P-68 will contribute to Petrobras' production growth, especially in 2020, with the interconnection of new wells in the Berbigão field, with the interconnection of Sururu field wells, the company said. P-68 measure 316 meters in length and 54 meters in width, and has 1.6 million barrels of storage capacity.

The FPSO is located approximately 230 kilometers off the coast of the state of Rio de Janeiro, at 2,280 meters water depth. The project foresees the interconnection of ten producing wells and seven injector wells to the P-68. Produced oil will be offloaded and transported by tankers, while gas production will be transported via pipeline.

The Berbigão and Sururu fields are located in concession BM-S-11A, operated by Petrobras (42.5%), in partnership with Shell (25%), Total (22.5%) and Petrogal Brasil (10%). The reservoirs of these fields also extend to areas under Onerous Assignment Contract (100% Petrobras) and, after the unitization process, will constitute the Berbigão and Sururu shared deposits.