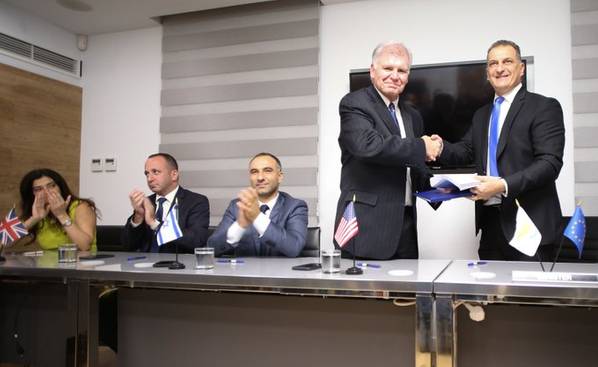 (Photo: Presidency of the Republic of Cyprus)

Cyprus signed a 25-year concession on Thursday with a three-member consortium for the exploitation of a gas reservoir south-east of the island first discovered in 2011.

The contract with Noble Energy, Shell and Delek is the first commercial exploitation licence signed by the Mediterranean island. The Aphrodite field is thought to hold an estimated 4.1 trillion cubic feet (tcf) of gas.

Cypriot authorities have said natural gas will start being extracted in 2025, with estimated earnings of 9.3 billion euros ($10.29 billion) over an 18-year period.

"The plan includes the implementation of what we consider the best possible option, transferring gas through an subsea pipeline to Idku in Egypt from where LNG will be exported to Europe and international markets," Cypriot energy minister Yiorgos Lakkotrypis said in a statement.

In September last year Egypt and Cyprus signed an agreement to build an undersea natural gas pipeline from the Aphrodite field to a liquefaction plant in Egypt.