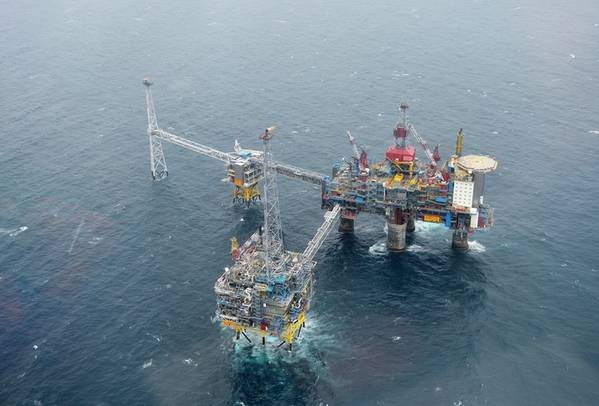 Since 1996, the Equinor-operated Sleipner field offshore Norway has been used as a carbon capture and storage facility, marking the longest ongoing CO2 storage project in the world. (Photo: Harald Pettersen / Equinor)

A group of 13 major oil companies charted out a plan on Monday to promote investments in carbon capture, use and storage (CCUS), ahead of a gathering in New York.

Carbon sequestration technology traps carbon in caverns or porous spaces underground. A number of oil and gas CEOs say the technology will be crucial to meeting goals set in the 2016 Paris agreement on climate change to reduce global emissions.

"A lot of people don't even know what CCUS is. I think the world is going to hear more and more and more about it," BP plc CEO Bob Dudley said. "I don't think we can meet the Paris goals without CCUS."

The group, known as the Oil and Gas Climate Initiative (OGCI), said it aims to double the amount of carbon dioxide stored globally by 2030. The group is also taking steps to reduce methane emissions.

The group formed in 2014 to support efforts to reduce greenhouse gas emissions. Its gathering will be held on the sidelines of a climate summit, where United Nations Secretary-General Antonio Guterres says he is banking on new pledges from governments and businesses to abandon fossil fuels.

Last Friday, millions of young people flooded the streets of cities around the world to demand urgent steps to stop climate change. Many, including 16-year-old Swedish activist Greta Thunberg, have criticized governments and industries for not doing enough.

The OGCI group said in a statement that carbon-capture technologies could be expanded to more efficiently trap large amounts of carbon released by facilities such as power plants, which could then be used in oil recovery and, ultimately stored - thus, removing it from the atmosphere.

The group plans to work with others to put carbon-capture techniques into operation in the United States, United Kingdom, Norway, the Netherlands, and China. On Monday afternoon in New York, it will sign a declaration of collaboration with certain energy ministers and other stakeholders, to commit to efforts to expand carbon storage.

The companies, which include Exxon Mobil Corp, Chevron Corp and BP PLC, account for 32% of global oil and gas production. They have agreed to cooperate to accelerate reduction of greenhouse gas emissions.