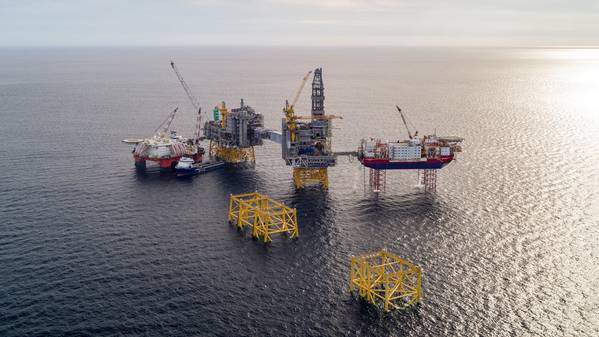 Although Norway’s offshore segments took a pounding in share-price value on Monday — with every segment incurring losses — the consensus here is that fundamentals offshore are good, and a combination of general uncertainty and specific contract losses are what rocked investors starting their week.

By mid-day in Oslo, the drillers were all falling fast: Seadrill shares were down over 14%; Borr Drilling by over 7%; Shelf Drilling 6% and Awilco down about 4%. Most would fall more by day’s end (see below)

The large supplier-contractors were also taking a hit, as were the operators. When Brent and WTO fell over 1% to $61.16 Monday — after “plunging” last week and dropping 5%since mid-July — the impact on operators was inevitable, and Equinor and Aker BP fell over 2% and Okea 4.66%.

Vessel operator Solstad Offshore was down 7.25%; Subsea 7 down by 4.7% and Aker Solutions by 4.54%. Analysts we talked to said it was a combination of things, not least reports that China could by more Iranian oil — at the expense of Western oil and liquefied natural gas (LNG).

“For sure. If you look at the high number of exploration wells, the PDOs picking up, the day rates and margins increasing every day, the fundamentals are improving slowly.”

As for investor guidance, he offered, “There has a been an increase in share buybacks (of companies confidently buying their own shares) and generally of everything improving, just perhaps a little more slowly than expected.”

Word events vs …
Adding to rapidly evolving world economic events that seemed on Monday to overtake market gains offshore, there’s also an audible “anti-hydrocarbons” drone investors and sector employees must hear. It’s reinforced by the industry itself which this week invited itself to a conference on Arctic oil and gas themed, “Predictable future in the North?”

In the world outside Norway, unpredictability can seem starker, and Monday’ hammering of energy companies on Oslo Børs was but a reminder that market stability — or rather instability — is what most needs to be managed in this new era.

Not least for the drillers. By market’s close in Oslo, Seadrill was down 18%, Borr Drilling nearly 11%; Shelf Drilling nearly 9%and Awilco 7.7%. Shelf had just announced a contract extension and Seadrill a contract cancellation in the wake of news from Baker Hughes that signaled a fifth-straight week of U.S. rig cuts.

Apart from price, that’s what instability looks like: good specifics drowned out by bad news at large, or a good general picture that pales alongside bad news closer to home. So, while supplier and operator fortunes recoiled today, some already see the happier big picture.

On Monday, influential Oslo numbers cruncher, Rystad Energy, is calling for a doubling of exploration drilling worldwide over the next five years. Let’s see if that gets any traction on Tuesday.