Investments in Exploration Drilling to Double 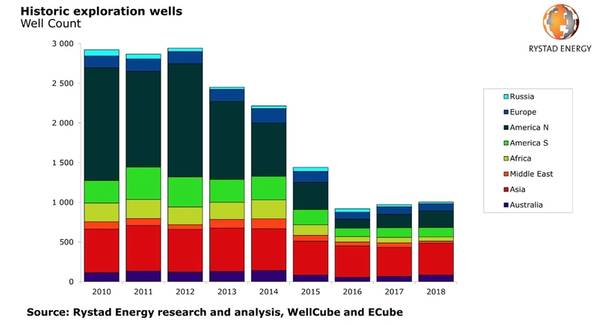 Rystad Energy sees investments both in offshore and onshore exploration drilling doubling in the next five years, compared to the last five years. Conventional onshore demand will be driven by Asia, Africa and South America.

Europe on the other hand, will be a hot spot for offshore exploration, led by investments on the Norwegian Continental Shelf, the energy research and business intelligence company said.

In the past few years conventional exploration drilling has been on a rocky road, dropping from 3000 exploration wells drilled in 2012 down to just 900 wells in 2016 – a whopping 70% decrease.

Exploration has been constrained not only by lower oil prices, but also other major shakeups in the hydrocarbon industry such as the shale revolution in the US.

As a consequence of low exploration activity, discovered resources have been insufficient to replace produced resources.

Shell, Murphy Evacuate Offshore Workers Ahead of Storm in Gulf of Mexico