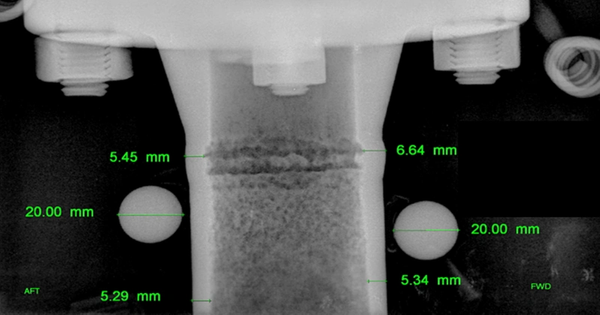 Separator nozzle stub shows weld and pipe corrosion after seven seconds of exposure time with the TAXI service. The green numbers are the measurements of remaining wall thickness on a pipe. All the darker areas within the center of the pipe illustrates evidence of pitting type and weld root corrosion. (Image: Oceaneering)

A technology used in security and drug enforcement was modified to solve the age-old problem of how to use radiography for non-destructive testing of pipelines on rigs without affecting nucleonic measurement associated with pressure vessels.

The adapted technology doesn’t skew nucleonics on high-pressure vessels such as oil-gas-water separators or force a shutdown, and it’s allowing operators in the North Sea to rapidly carry out deferred pipeline inspections without waiting for a planned turnaround or shutdown.

In an industry with aging infrastructure, non-destructive testing (NDT) is vital for determining whether a material or component remains fit for purpose. Radiography has long been used to seek corrosion, cracks and other problems in equipment like pipelines, particularly those that are insulated. But sometimes NDT methods like radiography interfere with nucleonic instrumentation and sensing programs already on use on a platform.

Nucleonic sensors are used on the high-pressure units that separate the production stream into oil, gas and water because such vessels can present a safety issue if they become too full or too empty. A nucleonic detector on one side of the vessel can sense an isotope on the other side. As the fluid level within the separator falls, the detector can sense the radiation from the other side, while a rising level of fluid blocks the signal.

When radiography is used, however, there is a high risk the radiation can “confuse” the nucleonic detector, says Jim McNab, NDT subject matter expert at Oceaneering.

“When the nucleonic detector sees the radiation from an exposed NDT isotope, it thinks it’s seeing the radiation from its own isotope. It confuses it, and it thinks there’s been a major production process issue and even shutdown of production. It’s a false alarm,” that often leads the control room to shut the rig down, McNab says.

Oceaneering worked with manufacturers of specialist “pulsed” x-ray systems and nucleonic instrumentation to design a procedure that makes it possible to carry out NDT inspections while the plant is in-service by eliminating the effects of radiography operations on nucleonics. Oceaneering calls the offering Trip Avoidance X-ray Inspection (TAXI).

TAXI uses an x-ray camera that uses short radiation pulses rather than a constant source of radiation, typical of radio isotope.

“The nucleonic detector can’t see the short bursts, but we still get good x-ray images of the process piping and equipment,” McNab says.

Ahead of an inspection, McNab says, the inspection team reviews sources of data that may influence what effect TAXI will have on the existing nucleonics.

“What we’re doing now is enabling operators to inspect piping and equipment they wouldn’t have been able to do previously, during production operations,” McNab says. “In essence, we’re able to find the leaks before leaks find us.”