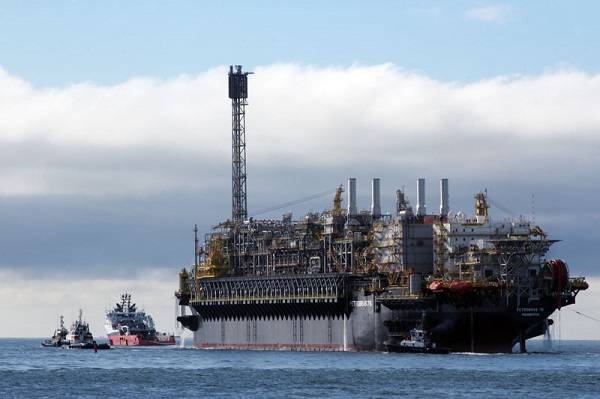 Petrobras started producing from the P-76 FPSO, the third platform in the Búzios Field, in the pre-salt of the Santos Basin, in February 2019 (Photo: Petrobras)

Brazil's government and state-controlled oil company Petroleo Brasileiro SA have settled a long-running dispute about one of the world's most promising offshore oil areas, clearing the way for a blockbuster auction later this year.

The national energy council announced on Tuesday that the government would pay Petrobras, as the company is known, $9.058 billion to end their contract dispute regarding the "transfer of rights area" (TOR).

What is that?
The TOR area is a roughly 2,800-square-kilometer zone off the coast of southeastern Brazil where billions of barrels of oil are trapped beneath a thick layer of salt under the ocean floor. It is part of a larger oil-producing zone known as the pre-salt, which has emerged as one of the world's most promising conventional oil plays.

The TOR was demarcated in a 2010 deal between the government and Petrobras, when the company raised some $70 billion in the world's largest-ever share offering at the time.

In order to maintain control of the company, the government granted Petrobras the rights to extract 5 billion barrels of oil in the TOR area in return for new shares worth 74.8 billion reais, or about $42.5 billion at the time.

The government also set aside a "contingency area" of about 1,000 square kilometers in case the original area proved insufficient.

Why the dispute?
The TOR arrangement provided for Petrobras and the government to revise some terms in the contract when fields were declared commercially viable, taking into account shifts in oil prices, production costs and other variables.

Petrobras began declaring TOR fields commercially viable in 2013, starting with the Buzios field, and has been haggling over contract revisions with the government ever since, as oil prices swung sharply and studies showed larger reserves in the area.

Brazil's cash-strapped government has not been able to offer that additional oil at auction because it had not come to terms with Petrobras on the revised TOR contract.

Until recent months, the two sides seemed far apart. But since new President Jair Bolsonaro appointed a new Petrobras chief executive in January, talks seem to have picked up pace, culminating in the more than $9 billion agreement.

What is next?
The government has scheduled for October 28 an auction for the rights to extract the excess oil in the TOR area, divided into four separate fields called Atapu, Buzios, Itapu e Sepia.

Government officials have said the auction could raise some 100 billion reais ($26 billion) or more.

Petrobras and the government are still discussing how the auction winners will potentially partner with the state oil company, which is already producing at Buzios and has the right of first refusal to remain operator at the four fields.

Regardless of the final arrangement, winners of the auction will be required to compensate Petrobras for the infrastructure and exploratory work in which the company has already invested.

While the exact value of that compensation has not been settled, Reuters reported late last year that the compensation, which is separate from the government's payment, is likely to be at least 30 billion reais ($7.9 billion).

Who is interested?
The October auction is expected to attract a range of major global oil companies, which have been discussing the opportunity with government officials in recent months.

Not least among the interested parties is Petrobras itself. While the firm is aggressively cutting debt, CEO Castello Branco has said the $9 billion payment from the government would be used to participate in the auction.

Among the companies with exploration and production assets adjacent or relatively close to the TOR area, offering potential cost savings, are Total SA, Royal Dutch Shell PLC , and China's CNOOC Ltd and CNPC.

However, they may need to keep an eye out for political interference over the next six months.

House Speaker Rodrigo Maia has argued that Congress must approve the accord between the government and Petrobras before the auction can take place. Others, including Finance Minister Paulo Guedes, dispute the need for congressional approval.