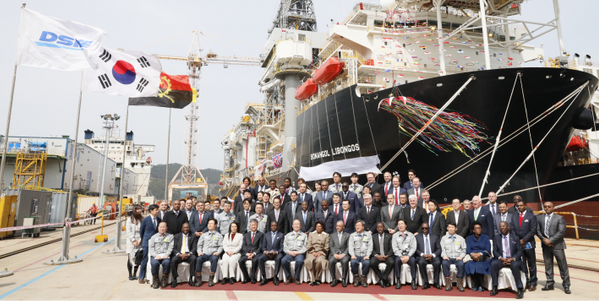 The new seventh-generation drillship, christened March 21 in Busan, is capable of operating in deep, ultra-deep and pre-salt waters and will be available to carry out national and international work, Sonangol said.

Sonangol president Carlos Saturnino, said, "Having now in our hands a drill rig, whose specifications allow us to overcome the challenges of the new exploration and production frontiers, Sonangol increases the range of integrated services of the primary chain, reducing dependence on external availability in the fulfillment of the exploration work programs."

Libongos, along with sister ship Quenguela currently under construction at DSME and expected for delivery in the first half off 2019, will be among four drillships operated by Sonadrill, an Angola-focused joint venture between Sonangol and drilling contractor Seadrill.

Seadrill announced in February that it will manage and operate the four vessels on behalf of Sonadrill for an initial term of five years.