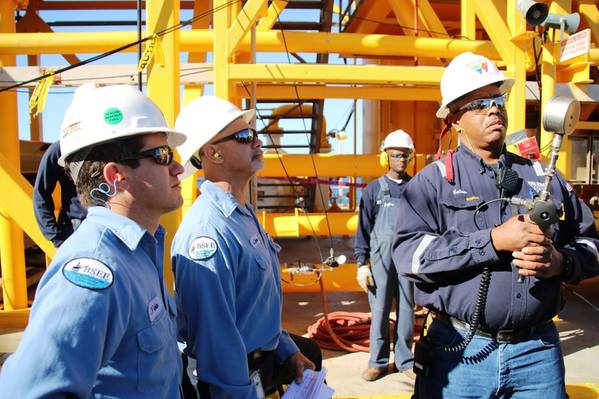 BSEE inspectors monitor a pressure gauge held by an oil worker during a pressure test of temporary equipment on a deepwater facility in the Gulf of Mexico (Photo: BSEE)

“President Trump’s proposed FY 2020 budget supports BSEE in continuing its mission overseeing safe, environmentally sustainable and robust offshore energy production,” said BSEE Director Scott Angelle. “As the administration works to promote sustained domestic energy exploration and production, BSEE is continuing its ‘We Can Do It All’ approach by increasing safety and environmental stewardship while at the same time supporting robust energy production on the U.S. outer continental shelf.”

“This administration calls for boosting domestic energy production to stimulate the nation’s economy and strengthen America's energy security, while providing for environmental stewardship,” said BOEM’s Acting Director Walter Cruickshank. “The FY 2020 budget request allows BOEM to continue its efforts to advance these goals as part of our statutory mission.”

“Overall, the budget complements the President’s soon to be updated draft proposed national offshore energy plan to provide Americans with access to the energy resources our country needs and ensure taxpayers receive a fair return from their development. In total, the budget is a statement of success for ‘all of the above’ American energy development and puts the President’s vision of energy dominance within our grasp,” Luthi said.