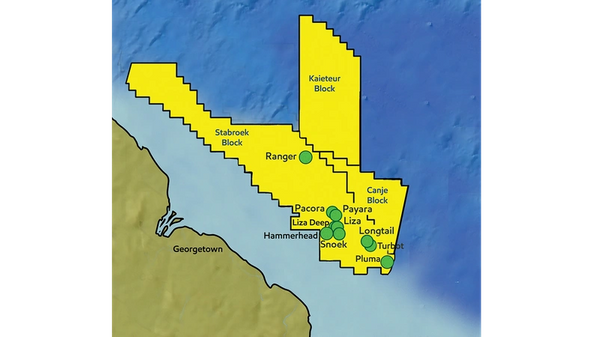 The closest of 10 oil finds Exxon has made off Guyana's coast is 110 km (68 miles) away from the northwest part of the Stabroek block, where the navy halted seismic data collection on Saturday, the company said. Each country's government says the incident took place in its territorial waters.

"Exploration and development drilling is continuing in the southeast area of the Stabroek Block," the company said in a statement. An Exxon spokeswoman declined to say whether the two vessels, owned by Norway's Petroleum Geo-Services, planned to continue their survey.

On Monday, shares in U.S. oil company Hess Corp, which owns a 30 percent stake in the Guyana project, fell more than 12 percent to close at $36.43, their sharpest single-session drop since early 2016. Markets were closed on Tuesday for the Christmas holiday.

Shares in Exxon, which operates the project and owns 45 percent, fell 3.8 percent on Monday while depositary receipts for China's CNOOC, which owns 25 percent, fell 2 percent.

Guyana's foreign minister said the government is "in discussion" with Exxon on next steps.

A century-long territorial dispute between the neighboring South American countries has flared up after Exxon announced the discovery of more than 5 billion barrels of oil and gas offshore Guyana.

In OPEC member Venezuela, by contrast, crude output is hovering near its lowest levels in 70 years amid an economic crisis and mismanagement under military rule.

Critics say socialist President Nicolas Maduro is using the dispute over the Essequibo, a sparsely populated jungle region making up two-thirds of Guyana's land which Venezuela also claims, to distract from hyperinflation and shortages of basic goods that have prompted millions of Venezuelans to emigrate.