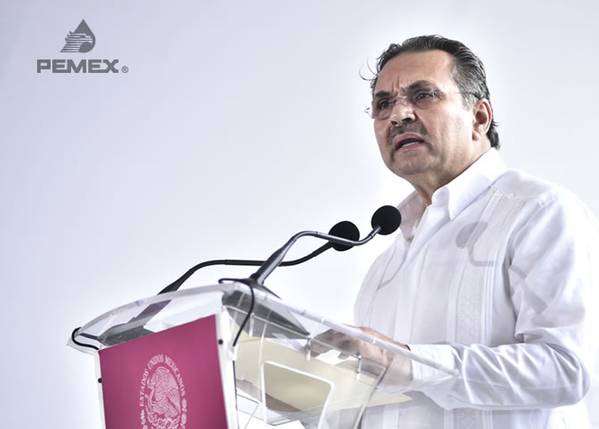 Mexico aims to lift oil and gas production by almost 50 percent in the next six years and in January will award infrastructure and drilling contracts to develop 20 fields, state oil firm Petroleos Mexicanos said on Saturday.

Octavio Romero, chief executive officer of the company generally known as Pemex, said the new government would increase exploration investment by around 10 percent annually to reverse dwindling output as he presented a new plan for the industry.

President Andres Manuel Lopez Obrador, who took office on Dec. 1, wants to revive Pemex, which has become heavily indebted as crude output fell from a peak of nearly 3.4 million barrels per day (bpd) in 2004 to less than 1.8 million in October.

"It's a new Pemex rescue," Lopez Obrador said alongside Romero in the port of Ciudad del Carmen in the southern Gulf of Mexico shortly before his government was due to present its first budget with Pemex's finances under close scrutiny.

Under the plan, Mexican crude output is due to climb to some 2.624 million barrels bpd by the end of 2024, while gas production will also rise by about 50 percent.

Output will stabilize in the coming months and start to pick up toward the end of next year, the Pemex CEO said. However, projections presented in the government's first budget later on Saturday suggested output would continue falling until 2020.

Mexico's previous government sought to increase production by opening up production and exploration to private capital. But the decline has yet to bottom out.

Lopez Obrador, an admirer of Lazaro Cardenas, the president who nationalized Mexico's oil industry 80 years ago, was opposed to the 2013-14 constitutional overhaul of the industry carried out by his predecessor, Enrique Pena Nieto.

In the meantime, Mexico will speed up exploitation of 20 mostly offshore fields in the Gulf of Mexico, Romero said.

To this end, contracts for the necessary infrastructure will be awarded on Jan. 15 and to drill wells on Jan. 31, he added.

Most of the fields are offshore and the government plans to issue "integrated" infrastructure contracts, Romero said. The drilling of the wells would be "turnkey" contracts that made the companies or consortiums responsible for delivery.

Pemex will be responsible for the engineering and supervision of the services. By December 2019, the 20 fields should yield 73,000 bpd of output, Romero said.

Energy Secretary Rocio Nahle told reporters in the city that priority would be given to Mexican firms in the contracting process, based on a restricted list of invitees.

Romero said nine companies had expressed interest in drilling the offshore wells, and five others had done so for the four onshore fields. All are majority Mexican-owned, he said.