Wave and tidal energy specialist Marine Current Turbines and its project partners Queen's University Belfast, Mojo Maritime and Edinburgh University, have secured a grant of £250,000 from the UK's Technology Strategy Board and the Engineering & Physical Sciences Research Council to develop a fully submerged (but easily surfaceable) SeaGen tidal turbine that can be deployed in deepwater sites where there are large tidal ranges or significant wave environments.

The project will be led by Marine Current Turbines and will build on the success of the company's SeaGen tidal system which has been generating electricity into the grid since 2008 (OE Febuary).

This announcement coincided with a 23 July visit to the SeaGen project, in Northern Ireland's Strangford Lough, by newly installed UK energy minister Charles Hendry, who said: ‘We want marine energy technologies to take their rightful place as part of a secure, low carbon system in the future.'

The new funding is part of a £7 million funding package awarded to nine wave and tidal stream research and development projects with the twin aims of driving down the cost of energy while improving the devices' reliability and performance.

Martin Wright, managing director of Marine Current Turbines said: ‘By developing a fully submerged device, we will be able to deploy our tidal stream technology in more areas, both in the UK and overseas which is an exciting prospect. The experience that we have gained with SeaGen's deployment and commercial operation is a huge asset in taking forward the development of the nextgeneration technology.'

Another recent recipient of Technology Strategy Board funding was Scottish firm AWS Ocean Energy which, with its project partner the University of Strathclyde, received £350,000 in additional funding support to develop its AWS-III device, a ring-shaped multi-cell surface-floating wave power system.

The outcome of two years' research and development work, the new wave energy device recently completed first-phase trials on Loch Ness. A single utility-scale AWS-III, measuring around 60m in diameter, is thought capable of generating up to 2.5MW of continuous power. The developers are seeking industrial and utility partners to enable the launching of a 12-cell, 2.5MW pre-commercial demonstrator in 2012 and subsequent commercialisation of the technology. AWS is also developing associated, patented technologies such as remote mooring systems in parallel. OE 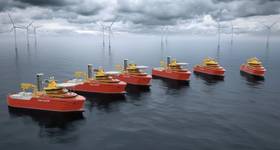