Another Sakhalin GBS goes in

The concrete gravity-base structure for Russia's Arkutun-Dagi field, part of the Exxon Neftegas-operated Sakhalin-1 development, was installed offshore northeast Sakhalin last month. Water depths in the area are around 35m. Construction of the GBS was completed at the end of May at the Vostochny yard, near Nakhodka in the Russian Far East, and it was towed out early June to the strains of a navy brass band.

The GBS is for the Berkut platform, an ice-resistant fixed structure designed to operate year-round in this seismically active area and withstand winter temperatures of 44°C, waves up to 18m and sea ice up to 2m thick. Exxon Neftegas contracted Aker Solutions in 2009 to design, construct and deliver the GBS primarily using Russian workers, subcontractors and materials. More than 4000 Russian nationals are reported to have worked on the design and construction of the GBS, which is not dissimilar to and bigger than its Russian concete gravity base forerunners Lunskoye-A (103,000t) and Pilton- Astokhskoye-B (90,000t) built by the then Aker Kvaerner and installed in 2005 as part of the SEIC Sakhalin-2 phase two development (OE January 2005). Heerema's modified H-851 barge is booked to handle the platform's recordsetting 42,000t topsides floatover next year (OE April 2012).

Arkutun Dagi, one of the three fields (along with Chayvo and Odoptu) being developed under Sakhalin-1, is scheduled for start-up in 2014. Production from the field will be routed through the existing Chayvo onshore processing facility on Sakhalin Island and delivered through pipelines to the De-Kastri oil export terminal located in Khabarovsk Krai.

Completion of the gravity-base structure is another significant milestone for Sakhalin-1 and brings us one step closer to production start-up from the project's third field, said Exxon Neftegas chairman Jim Flood. 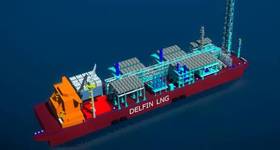