Overall, total capital investment on developing UK oil & gas reserves rose by 40% to £8.5 billion in 2011, according to Oil & Gas UK's 2012 Economic Report. Confirmation in the 2012 UK Budget of measures to promote activity in a targeted way, and continued, constructive discussion since then, has seen the industry commit to investing around £11.5 billion in the UK this year.

Tax revenues on production rose to £11.2 billion in 2011/12 and were boosted by the £6 billion corporate and payroll taxes paid by the supply chain. The 656 million boe that were produced from UK oil and gas reserves saved the UK £40 billion in energy imports.

However, tax revenues had been expected to be greater. An unexpected 19% decline in production was experienced due to a combination of lower gas demand, unplanned stoppages for integrity related work and only a handful of new fields coming onstream following a marked drop in investment in the period 2007 to 2009.

Production was also more costly than in previous years, with operating cost per barrel rising by a quarter from 2010, to $17/boe. The number of exploration wells drilled in 2011 halved compared with 2010 although many of those that did go ahead were successful, together adding 200 to 300 million boe to reserves.

An even brighter picture emerges from Deloitte's Petroleum Services Group's latest quarterly report. The report, which documents drilling and licensing across North West Europe between 1 April and 30 June, shows 18 exploration and appraisal wells were drilled on the UKCS during the period a 64% increase on the first quarter of 2012. Interestingly, we are also seeing a reversal in terms of drilling activity levels in the UK compared to Norway which is down 33% in the last quarter, notes Deloitte's PSG MD Graham Sadler. This may suggest the recent tax changes introduced by the UK Government are encouraging organisations to look at the North Sea in a more positive light.

With deal activity in the UK also rising 47% this quarter, compared with the second quarter last year, and an increase in field development approvals and start-ups, the outlook for the UK oil and gas industry is positive, says Deloitte. So far in 2012, eight new fields have come on stream, higher than the total number of field start-ups seen during 2011 and more than double those seen in 2009 and 2010. The number of approvals has also risen to 12 so far this year. Meg Chesshyre 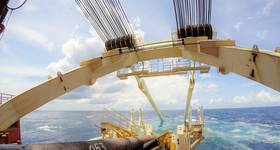