We are moving away from being subsea plumbers into people who are deeply integrated into the full value chain of the subsea production system,’ Peter Blake, subsea systems manager with Chevron Technology Company, told Subsea 2012 attendees. In the past, he added, subsea had been largely an inspect and replace type of operation. That was going to have to change.

‘We are going to have to look at condition monitoring, and rather than replace on failure, actually do some analysis of how a system is behaving,’ he noted. As production moves into deepwater, systems have to be more tuneable. Some of these fields have very long field lives and large elements of tail production. ‘We are going to have to be able to plug-and-play some of these technologies and tune our production systems as we move forward.’

Focusing on how this could be achieved, Blake said Chevron has a number of collaborations with technology providers and has set up three technology centres – one in Aberdeen, headed by Blake, one in Houston and one in Perth, Western Australia. He cited as an example the Subsea Wet Installation Systems (SWIS) joint industry project set up to establish performance of wet insulation materials for pipeline and equipment up to 10,000ft and developing system improvements by understanding behaviour. The project, co-managed by Chevron and Statoil, has 13 participants and a budget of $4.5 million. Statoil, Heriot-Watt University and Doosan Babcock are all providing test locations. Initiated in 2007, this JIP is carrying out long-term simulated service testing to establish performance of available insulation systems at field operating conditions.

On the skills front, Blake noted: ‘We, like everybody else, are constrained somewhat by our people capability. We are working hard within the company to try and improve the number of engineers and increase the skills set of the subsea engineers we have got.’ Chevron has what it calls its horizons training programme for new graduates, and for the first time there is a subsea curriculum. ‘You can become a subsea engineer in Chevron through the programme. Before that you had to become a facilities engineer, or a drilling engineer and then swop into subsea.’

Moving forward, Blake added that Chevron would continue to invest in R&D and continue with its three centres of excellence. ‘Here in Aberdeen we are hoping to grow as the business grows,’ he explained. ‘We are hoping to increase the number of subsea engineers. We’re doubling, or more than doubling the subsea production in Chevron. The knock-on effect of that is that we also need to more than double the subsea engineers.”

BP absolutely remains committed to deepwater and to making it safe, Dave Turner, the company’s VP global subsea production operations, told the conference. ‘BP is the largest deepwater producer among the major international oil companies, and we’ll continue to explore both in well-established operations as well as test opportunities in new provinces.’ In the past year, he said, the company it had established strong new footprints in both Brazil and India. ‘For BP, around 20-25% of our global production is now going through subsea systems and it is going to increase.’

‘It is the human capability which has probably been challenged most by the recent pace of developments into deepwater,’ Turner noted. ‘We have clear evidence of the long-term requirement building here.’ He said he believed that the Subsea UK organisation should take a central facilitation role in this mix. ‘Both here and in the US we are going further upstream into schools. We are taking all of the people we can into this business and it is still not enough. We have to find different ways of doing that.’

Centrica Energy expects its annual upstream production to reach 75 million boe in the next three to five years and 110 million boe by 2020, according to technical director Chris Bird.

This would be achieved, Bird told the conference, by a targeted blend of organic growth and acquisition with a particular focus on the Atlantic Basin. Centrica has a diverse portfolio across power, storage and upstream with some ‘interesting technical and economic challenges to overcome’ he noted. The portfolio will continue to grow in the future, and the company could spend as much as £26 billion up to 2020.

Bird pointed to IEA estimates that to meet security of supply energy sector capex for 2012-35 would be $38 trillion, of which oil & gas capex would account for $20 trillion and the power sector $18 trillion. Figures from Schlumberger Business Consulting indicate that oil & gas capex quadrupled from an estimated $125 billion in 2001 (50 x $1bn+ projects per year) to $500-600 billion in 2012 (200 x $1bn+ projects per year). Forward expenditure is put at $600 billion plus per year. Independent oil & gas companies have increased their capex by 21% 2011/12, national oil & gas companies by 15% and integrated oil and gas companies by 8%.

Project performance (the percentage of large projects over running over 50%) had increased from 10% in 1997, to 15% in 2005, and 28% in 2011 – and 2015 was predicted to be even worse, Bird pointed out. Today only 30% of projects fully met customers’ expectations. With projects becoming more complex, people were becoming the bottleneck rather than access to capital and that the supply chain was stretched in many areas.

He concluded that the business environment to get projects delivered within customers’ expectations was going to become more challenging and that the industry needed to take another look at how it delivers capital projects in the wider sense, considering how it manages the business as well as the project.

‘The biggest issue is access to the right level of resources with the right competency, capability and capacity to deliver effectively,’ stressed Bird.

‘We need to look at potential future trends and ensure that we have the best strategy for the supply chain from a contractor management and relationship management perspective. Where it really counts is how we work together harnessing the power of teams to deliver both pioneering spirit and high performance in the development phase.’

Sustaining the theme of recruitment, the Subsea 2012 exhibition included a job zone with stands manned by Chevron, Search and Technip, and a well-read notice board. There were also presentations from Duncan McSporran, from the Engineering Development Trust on liaising with schools to create the future talent pool and from Richard Stark, an ex-serviceman now with Apache North Sea on transferring talent from the military to the oil & gas industry. OE 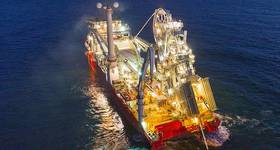