Gearing up for growth

Kongsberg Oil & Gas Technologies is the relatively small group, with a current roster of around 300 people, spun off from parent group Kongsberg Maritime a year or two ago. Having merged its drilling and production units into a single division early this year, KOGT is now looking for further growth in a subsea portfolio underpinned by the company's in-house riser technology and integrity management expertise.

Acquisitions are on the cards, says Terje Gunnerød, SVP sales & marketing at KOGT. ‘We are building up our capabilities in the subsea segment, and are involved in various FEED studies with both end users and the major suppliers. We have unique complimentary skills in riser technology. Every supermajor is a customer and whenever they have challenging riser situations we are asked to advise.' Among the company's recent assignments was a full engineering analysis and investigation into the root causes of riser failures in GDF Suez E&P Norge's virtually brand new Gjoa platform. Technip was called in to replace two of them early this year.

KOGT breakout technology Gunnerød sees a strong potential market for includes CRIS, the company's patented capstan reel installation system for flexible risers and umbilicals. With this system, the installation tower and relevant tensioner clamps on a vessel are replaced by a reel that uses the capstan principle to ensure controlled installation. ‘This is a real step change,' says Gunnerød. ‘It significantly reduces the risk of damaging the riser, ensuring simpler, faster and safer product installation, without the need to work at great height. Turnaround time for flexpipe installation is much quicker than with conventional systems, and it can be deployed on smaller multi-role vessels, helping to cut costs.'

The first CRIS system – capable of spooling flexpipe up to 16in – is on the new OIG Giant 2 offshore support vessel, due for delivery this summer to the Offshore Installation Group, a Harren & Partners' start-up company, following its conversion at the Lloyd Werft shipyard in Bremmen, Germany. A second system will be on the OIG Giant 3, to be delivered next year.

On the right track Bergen was the scene of much of the early work that facilitated the Hugin autonomous underwater vehicle's successful crossover from military to oil & gas duty back in the 1980s. And last year, in the Hjelte fjord near Bergen, the AUV added another industry benchmark to an already impressive tally: the world's longest multi-sensor AUV pipeline survey.

‘The sensor technology in the Hugin is improving all the time,' says Terje Gunnerød.

‘Hovering a few metres above the seabed, a Hugin 1000, equipped with an advanced suite of Kongsberg Maritime imaging equipment including the HISAS 1030 synthetic aperture sonar, EM 3002 multibeam echo sounder and an optical camera with LED lighting, inspected around 30km of subsea pipeline in an eight-hour, two-pass mission. The survey was completed in a tenth of the time typically taken by the surface vessel/ROV combination usually associated with such work,' he adds.

Operating from a Royal Norwegian Navy vessel, the AUV surveyed two pipelines in 180-560m of water going to the Mongstad refinery. In the first pass, side-scan data from the HISAS 1030 sonar was used to detect and track the pipelines in real-time, using PipeTracker software (run as a plug-in module in the standard Hugin payload system) for pipeline detection and tracking extracted pipe-like features in the sonar images, reportedly with a high degree of robustness towards false detections. The Hugin 1000 control system in turn uses the identified pipeline tracks to position the vehicle at an optimal range for HISAS imaging, the whole process being fully automated inside the AUV and requiring no operator intervention.

In the second pass, the Hugin followed the pipeline tracks identified in the first pass at low altitude and inspected the pipelines using the EM 3002 multibeam and the optical camera. After the mission, the recorded HISAS 1030 data was postprocessed into high-resolution (40x40mm) sonar images and bathymetry maps of the pipeline. Together with the optical images and the multibeam data recorded in the second pass, this gave a detailed view of the pipeline surroundings and the pipeline itself, reports Kongsberg. The complete procedure was repeated the next day over the second pipeline in a new eighthour, two-pass mission. Both pipelines were surveyed at a constant speed of 4 knots and at 4-25m altitude, depending on the sensor in use.

Kongsberg Maritime's next-generation multibeam echosounder, the EM 2040, is now available with the Hugin 1000 AUV. With improved resolution and depth rating of 6000m, the company says this offers a substantial improvement on the EM 2000 used in deepwater Hugin versions up to now. OE 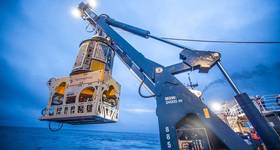