Wärtsilä will deliver the topside modules to be installed on the platform, along with electrical and automation packages. The contract amount has not been disclosed.

Earlier this month, it was announced that Subsea 7 contracted Nexans to provide subsea cables for the Lianzi field; these will be delivered in 2014.

Wärtsilä's 9000kW system will be used to heat the 43 km-long subsea production pipeline between the Lianzi field and the Benguela Belize Lobito Tomboco (BBLT) platform. The module will regulate the power of the cables and temperature of the pipe.

“The Wärtsilä DEH technology is proven and has been used already for more than 10 years on the Norwegian continental shelf. It is also being used in West African installations, as evidenced by this latest valuable order. It is cost effective with considerable environmental benefits, and not surprisingly, there is increasing interest from oil & gas industry operators around the world. We envisage that demand for this technology will grow rapidly,” said Juhani Hupli, VP Electrical & Automation, Wärtsilä Ship Power. 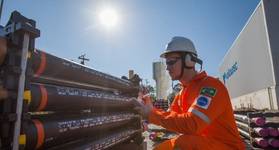