The Danish offshore is a mature oil and gas province with 40 years of production, but the Danish Energy Agency’s latest annual report,* says that the country is expected to remain a net exporter of oil through 2020, while gas production is estimated to exceed domestic gas consumption through 2025. This is threeyears longer than estimated one year ago, due to an expected decline in future domestic gas consumption.

July 4, 2012 marked the 40th anniversary of Danish oil and gas production, which began at the Dan field, still producing today. Since 1972, close to 28% of total Danish oil production has been extracted from the Dan field, and current projections are that the field will keep producing well into the future.

A comprehensive plan for the further development of Maersk’s Tyra Southeast field was approved on 20 November 2012. Start-up is targeted for spring 2015. The plan includes a new four-leg platform to accommodate 16 wells. The new platform will be connected to the existing TSEA platform by a bridge. A new pipeline will run from the Tyra East platform to the new platform to supply lift gas to both new and old wells. Power supply and control signal cables will be laid parallel to the pipeline. Based on the 12 production wells planned initially, total production from the field is expected to increase by around 3.3 million cu.m of oil and around 4.6 billion cu.m of gas. Total investments in connection with the development are estimated at DKK 5 billion. Bladt Industries, in Aalborg is building the new 1100-tonne platform and bridge. Delivery is scheduled for May 1, 2014.

A clarification of the future of the Dagmar field, which has been closed since 2005 due to poor or non-existent hydrocarbon production, is expected in 2013.

Amounting to about $110/bbl in 2012, the average oil price remained at the 2011 level. However, in terms of Danish kroner, the oil price rose by slightly more than 11% due to the higher US dollar exchange rate. Based on an oil price of $125/bbl, total state revenue from North Sea production is estimated at DKK 24-30 billion/yr for the next five years.

The DEA is preparing a new licensing round, covering the area in the Danish sector of the North Sea west of the 6° 15’ east longitude. The aim is to officially open the seventh round at the end of this year. The most recent licensing round (sixth) was held in 2006. The rest of the Danish licensing area is offered for licensing according to the Open Door procedure introduced in 1997.

The success rate for wells drilled under the sixth round license remains high, at 80%.

Wintershall Noordzee, operator for license 5/06, drilled the Hibonite-1 (5504/1-3) exploration well in the western part of the Danish North Sea in 2012. Bayerngas and EWE, and as the Danish North Sea Fund, were also partners in the well, which discovered oil in Upper Jurassic sandstone. Hibonite-1 was drilled as a deviated well and terminated in Jurassic clay at a vertical depth of 4,431m below mean sea level. Wintershall took cores and logged the well. Oil and gas were produced during testing. In order to assess the extent of the oil discovery, two sidetracks were drilled, Hibonite-1A and Hibonite-1B. Both sidetracks confirmed the presence of oil-bearing sandstone of Late Jurassic age.

In 2012, the DEA carried out a total of 40 inspections of installations in the North Sea and onshore, safeguarding health and safety standards for the almost 3,000 people who work on North Sea installations. In 2012, the DEA registered 12 reports concerning work-related accidents on offshore installations and mobile accommodation units. The accident frequency—defined as the number of accidents per million working hours —has dropped by 70% since 2004, and is far lower than the average accident frequency for all onshore industries. 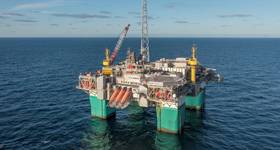