Subsea 7 was awarded a contract worth more than US$70 million by Stone Energy for Cardona field in the US GOM. Scope includes engineering, procurement, installation, and flowlines commissioning, risers, pipeline structures, and a gas-lift umbilical.

Shell picked Technip to provide engineering, procurement, and installation services covering subsea infrastructure at Stones field in the US Gulf of Mexico. The scope includes installation of the subsea production system and lateral gas pipeline, inclusive of project management, engineering, and stalk fabrication.

Rowan Companies entered into a three-year contract with Cobalt International Energy, L.P. for the Rowan Reliance, a new ultra-deepwater drillship under construction at the Hyundai Heavy Industries Co. Ltd. shipyard in Ulsan, South Korea. Delivery is scheduled for October 2014.

Estaleiro Enseada do Paraguaçu (EEP) awarded ALMACO Group a contract for the living quarters on six drillships to be used in the Brazilian pre-salt drilling program. Design and fabrication starts in 2013 with the sixth drillship to be completed in 2019.

OneSubsea has been awarded a £65 million contract to manufacture subsea trees for BP’s West of Shetland Quad 204 project. This redevelopment of Schiehallion and Loyal fields involves a new FPSO and a major upgrade to subsea infrastructure.

TWMA was awarded an offshore processing contract in Angola.

The agreement, worth up to US$35million, will see TWMA take the concept through design, installation, and operation of a system onboard a newbuild drillship.

EMAS Amc was awarded a contract by VAALCO Gabon, for the expansion of the Etame Marin Field off Gabon, Africa. The EPIC scope encompasses rigid pipelines along with the transportation and installation of flexible pipelines and two fixed production platforms. The contract is worth about US$120 million. 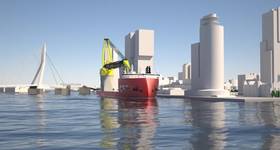