Marine seismic surveying in the Arctic presents many challenges. Conducting streamer surveys in the presence of high ice concentrations eliminates the ability to safely tow a conventional GPS tail buoy. When conducting 2D surveys under these conditions, the tail buoy is typically removed, which leaves only compasses as a means to calculate the cable position.

Compass data must be corrected for declination caused by the Earth’s magnetic field. As a first order correction to the raw compass bearings, the navigation software can apply a gridded declination. That is, a gridded World Magnetic Model (WMM) or Enhanced Magnetic Model (EMM) declination is applied as the seismic vessel sails through the model. However, this method is not adequate at high latitudes, due to temporal variations in the Earth’s magnetic field. Instead, a shipboard declinometer has been developed that measures real-time magnetic declination, which is then applied to the cable compasses in an open traverse from the vessel to the tail.

On November 1, 2012, the declinometer observed a geomagnetic event in the Beaufort Sea during which the peak declination changed 12 degrees (12°) in 6 minutes. Magnetic observatories at Point Barrow and Deadhorse confirmed the event. This article discusses the improvement of real-time declinations over modeled declinations for marine seismic streamer positioning in the Arctic.

The crustal field Fcrust(s) generated in Earth’s crust and upper mantle, which varies spatially but is considered constant in time for the time-scales of the models;

The combined disturbance field Fdisturbance(s,t) from electrical currents flowing in the upper atmosphere and magnetosphere, varying in space and rapidly in time.

The observed magnetic field F(s,t) is then:

F(s,t) = Fcore(s,t) + Fcrust(s) + Fdisturbance(s,t) Magnetic models only represent the main geomagnetic field (Fcore) which accounts for over 95% of the field strength at the Earth’s surface. Temporal and small wavelength disturbances are not computed by these models.

Groves (2013) describes the accuracy of these models. He states that “regional variations, correlated over a few kilometers, occur due to local geology. Global models are typically accurate to about 0.5°, but can exhibit errors of several degrees in places. There is a diurnal (day-night) variation in the geomagnetic field of around 50 nT. Short-term temporal variations in the Earth’s magnetic field also occur due to magnetic storms caused by solar activity. The effect on the declination angle varies from around 0.03° at the equator to more than 1° at latitudes over 80°.”

We will see later that magnetic events with declination changes of more than 1° are common in the Arctic. We can also expect these events to fluctuate in frequency as we progress through the 11-year solar cycle (Fig. 1). At the time this was written, the Earth was progressing into the peak of a solar cycle.

In the absence of a positioning tail buoy due to ice, as explained earlier, special care must be taken with declination to adjust the compass-to-compass positioning traverse along the streamer by measuring the combined geomagnetic field.

ION Geophysical has developed a declinometer to observe magnetic declination in real time on a seismic vessel. The declinometer consists of a fluxgate magnetometer and an inertial measurement unit (IMU) disciplined by dualantenna GPS. A calibration maneuver is required to measure and compensate for the hard and soft iron effects that a steel vessel imparts on a magnetometer. The measurements from the declinometer are then passed to the navigation system and applied when processing the positioning data. Details can be found in patent application US 20120134234 (see references).

While shooting seismic line 6325 in the Beaufort Sea on November 1, 2012, the seismic vessel GeoArctic experienced a significant magnetic event. The declinometer recorded hours of disruption and a change in magnetic declination of 12° in 6 minutes at the event’s peak about 55,000 seconds into the day (about 15:16 UTC) as illustrated in Fig. 2. The blue dots in Fig. 2 are the raw declinometer observations that come at about 3Hz. These are particularly noisy data during this period. The red line is an alpha-beta filtering of the raw observations that is used to correct the cable compasses from magnetic azimuth to true azimuth. The green line at about 24° is the declination determined by the World Magnetic Model (WMM) for the time and position of the vessel. The GeoArctic was towing a 9km-long cable at the time of this event. If a modeled declination instead of the declinometer data were used to correct the compasses, the tail of the cable would “wag” as much as almost 2km during the period of the event (12° in radians x 9km).

INTERMAGNET is a “global network of observatories, monitoring the Earth’s magnetic field” (www.intermagnet.org). The INTERMAGNET observatory nearest to line 6325 is Deadhorse (DED), about 350km away. Point Barrow observatory (BRW) is farther away. Fig. 3 is a map of the Beaufort showing the location of the event (line 6325), DED and BRW.

How common is an event of the size measured on line 6325 on November 1, 2012 (henceforth JD306), DED 1-minute declination data are available from July 26, 2012, onward. To answer the question of the frequency of events, the authors parsed the DED 1 minute records from July 26, 2012, to July 13, 2013 (the last available at the time of writing this paper). Fig. 5 shows the range in declination for each of the 353 days plotted against the sequential day of the period. JD306, the day of the event analyzed in this paper, is plotted in red. Its declination range is 9.49°, a bit less than observed by the declinometer on the vessel (12°).

Declinometer declinations are an enormous improvement over gridded model declinations for this event, but the scale and rapidity of this event exposed several deficiencies in the system. The compass birds used on the GeoArctic internally record a magnetic azimuth every 2 seconds, but an average of the available readings are passed upstream. The average is taken when the compasses are polled, but it is the last average (and not the current average) that is passed upstream at the time of the polling. On this project the compasses were polled every 16 to 18 seconds. In effect then, the compass data is one and a half polling intervals old when it is finally available for use by the navigation system, or about 25 seconds. Recall that this is a rapidly varying event, changing 2°/ min. sustained for more than an hour, peak to trough to peak.

On the declinometer side, an alphabeta filter is applied to the raw 3Hz declinations to provide slowly varying readings to the navigation system. This is an “optimal” filter (Benedict 1962) where alpha is fixed in the declinometer at 0.0131 and beta is defined as alpha^2/ (2-alpha). Although all causal filters have delay, the alpha-beta filter has a rate term that accelerates change. A close examination of the “Peak of the Event” plot in Fig. 2 will show that the red filtered curve leads as well as lags the blue raw data. In fact, a cross correlation of the raw and filtered data shows no net delay at all. But the leading and the lagging are not good. The alpha-beta filter in the declinometer was just not tuned for an event such as this. Upon experimentation, the alpha parameter was changed to 0.0394 to better fit the excursions of this event and to give good performance in normal times, too. An alpha-beta smoother (forward and backward filter combined) gives marginally better results, but is not a real-time solution.

The vessel was configured with a 9kmlong cable and 33 seismic compass-birds attached, roughly one every 300m. Figs. 6-8 are plots of the cable compass data for a section of line 6325 around the time of the event. Fig. 6 shows the compass readings versus shotpoint number with the gridded declination applied. The event can clearly be seen with wild excursions around shotpoint 2000.

Fig. 7 shows the application of the real-time declination data to the compass data as they are time stamped in the navigation data.

Since the compass data are delayed as explained earlier, there are remnant disturbances that have not been compensated for, but the majority of the event has been removed.

Fig. 8 shows the compass data after an appropriate delay for the compass measurement has been applied, removing the magnetic anomaly entirely.

The orientation of the cable was slowly changing in a current during the 1000 or so shotpoints of these figures which accounts for the gradual increase of the azimuths of these 33 compasses. 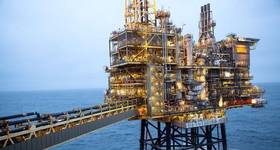