GE Oil & Gas today announced the opening of a logistics base for the Brazilian oil and gas sector.

With an area of 590,000sq. ft and investments that exceed US$100 million, GE’s base in Niteroi in the state of Rio de Janeiro was designed primarily to load and unload installer ships. These vessels carry heavy equipment, such as giant reels of flexible pipes, and target the mobilization and maintenance of oil wells.

“GE is proud to start the operations of this logistics base, a state-of-the-art structure that will enable a more efficient delivery of products and services for our client, Petrobras. This inauguration is an important step in strengthening GE's presence in the oil and gas sector and a significant contribution in terms of productivity gains for pre-salt fields exploration,” said Marcelo Soares, global president and CEO of Wellstream, a GE Oil & Gas business.

The base has a 320-ton capacity crane, the largest "hammerhead" in the world. The crane, which gets its name from its long arm and T-shape, required an investment of US$7 million. It is 140ft  tall, equivalent to a 14-story building.

The operation of the logistics base creates 250 jobs. The project reinforces the company’s innovation strategy in Brazil that has become a reference for GE worldwide. The new base will serve Brazilian state oil company Petrobras, a strategic client and partner of GE Oil & Gas in Brazil.

"The potential of the Brazilian oil market requires innovation. GE Oil & Gas will continue its historic partnership with the country to help promote new discoveries. It is of vital importance for us to be increasingly efficient in Brazil, strengthening our presence in the constantly growing local industry," said Joao Geraldo Ferreira, president and CEO for Latin America—GE Oil & Gas.

Aside from its offshore capabilities, the base also features advanced land transportation infrastructure. The facility has, for example, two straddle trucks, which sit high above the ground and carry cargo beneath their structure, and other equipment for moving large pipes on the ground with capacities of 300 and 350 tons each.

The site also has three warehouses that have a total area of 55,000sq. ft for storage of accessories and parts.

The new logistics base is positioned close to a number of key components for Petrobras such as service providers and next to Wellstream's existing plant in Niteroi. This GE unit is a supplier to Petrobras and to other operators in Brazil with high-quality products and flexible pipes for oil and gas subsea transportation. The base also is strategically located nearby the Santos Basin in the Brazilian pre-salt area. 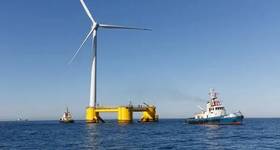 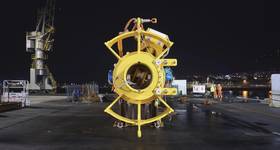