The Middle East market remains vibrant with producers, led by Saudi Arabia, expected to continue spending to retain market share, Singapore based offshore support vessel operator Vallianz Holdings said today as it announced a US$300 million contract in the region.

Vallianz's latest contract will see it supply two self-propelled, self-elevating platforms to be used to provide well servicing on the operator's platforms in the Arabian Gulf, starting 3Q this year, for five years with a two-year extension option.

The contract follows a five-year charter worth $97 million signed in December for a customized offshore floating storage and supply vessel, which will be the first of its king to be deployed in the Middle East when the contract starts in Q3 this year.

Saudi Arabia, home to some 16% of the world's proved oil reserves and Saudi Aramco, the world's largest producer, is the world's largest oil exporter, according to the US Energy Information Administration. It also has a five year plan to expand natural gas production, through offshore fields in the Persian Gulf, including Karan, Arabiyah and Hasbah. Last year, the firm announced it would be investing $40 billion/yr for the next decade.

"As a result, industry analysts expect exploration and production spending in the Middle East to show a double-digit increase in 2015 as compared to 2014."

Saudi Aramco has recently issued a string of engineering contracts and it continues its spending on both brownfield and greenfield projects. The firm selected Houston-based McDermott International and KBR as two of the winners of a global competition for a new long-term agreement (LTA) for future brownfield work in various fields offshore Saudi Arabia.

McDermott International was awarded a contract for the engineering, procurement, construction and installation (EPCI) of 12 jackets for offshore oil and gas fields in Saudi Arabian waters. Worley Parsons and Wood Group have also recently won contracts with Saudi Aramco.

One of the firm's current offshore projects is the Arabiyah-Hasbah offshore gas fields project, which will produce 2.5 billion scf/d through the Wasit Gas Plant when completed.

The complete development of the two fields encompasses the engineering, procurement, fabrication and installation of a total of 12 wellhead platforms, two tie-in platforms and one injection platform, besides to a 36in 260km-long export trunkline and about 200km of mono-ethylene glycol (MEG) pipelines, 200km of subsea electric and control cables and 40km of offshore flowlines.

“With the majority of our order book comprising long term vessel charters in the Middle East region, we believe Vallianz has a resilient business model to successfully navigate through this period of market volatility," Vallianz CEO Ling Yong Wah said.

The two self-elevating platforms are equipped with cranes and capable of supporting various offshore operations, from wire line intervention activities and wellhead maintenance to the transportation of materials, equipment and personnel.

It is the first time Vallianz is supplying this type of self-elevating platforms. 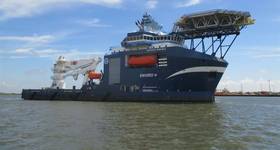